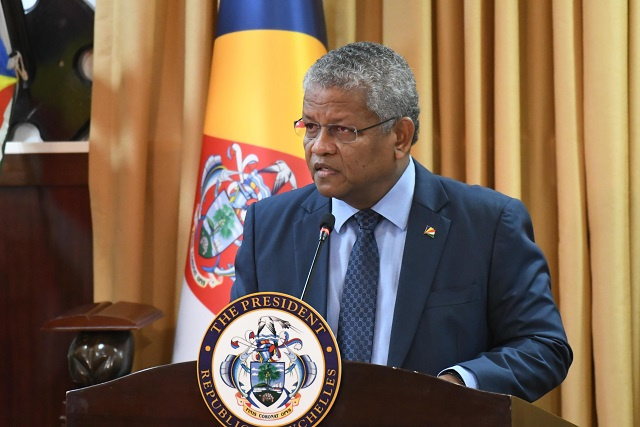 (Seychelles News Agency) - In his second State of the Nation address, the President of Seychelles announced an upcoming revision in COVID-19 measures, spoke about the rising cost of living and gave an update on the rescue plans for Air Seychelles.

The President also expressed concerns that the new conflict between Russia and Ukraine could hinder tourist visits from Eastern Europe.

Ramkalawan made his second address in the National Assembly on Tuesday in the presence of members and high government officials in which he said that his government is focusing on the transformation of the Seychellois society.

Seychelles, an archipelago in the western Indian Ocean, has presently 541 active cases of COVID-19 and only eight patients at the Family Hospital at Perseverance.

"With the progress we are making I will chair a platinum meeting this week and the principal focus on the agenda will be to look at the restrictions in place currently and we will look at relaxing the restrictions so that our people can breathe again," said Ramkalawan.

The island nation experienced a hike in the number of active COVID-19 cases due to the spread of the Omicron variant from December up to recent weeks.

The President also talked about the rising cost of living which he said is a subject that preoccupies Seychellois today.

"The cost of commodities year after year will keep increasing. What balances the increase is a rise in salaries and that is what Seychelles has not been able to do in the last 16 months because of our economic situation. The finance minister has said that if our economy keeps improving this year, we will look into the possibility of giving people a raise in wages and this will reduce the rate of inflation," said Ramkalawan.

The cost of imports is rising, he said, due to rising commodities and transportation prices globally.

Ramkalawan spoke about the government's concerns on the current crisis between Russia and Ukraine.

"This is one of the things that is worrying my government. What will happen to our tourists if there is a war, especially the new eastern European market we have tapped into. War will mean sanctions imposed and that will have a direct impact on our tourism industry. Today this is our biggest worry," he said.

Since Seychelles reopened its borders to all visitors in March 2021, there has been a significant improvement in the tourism industry which is the top contributor to the island nation's economy.

Ramkalawan talked about Air Seychelles which had a debt of over $150 million with Etihad and its bondholders.

"We have negotiated with Etihad and the bondholders and Air Seychelles went into administration. But today we can celebrate because through our negotiation we have been able to write off $100 million (SCR1.5 billion) of debt for Air Seychelles," he said.

Air Seychelles appointed two administrators in October last year to initiate the airline's reorganisation process after a petition was filed by the Apex Trustees Bondholders on August 19, 2021, for the winding up of Air Seychelles to recuperate their investment made in the airline.

Meanwhile, the National Assembly will resume on Friday where the Leader of the Opposition and the Leader of Government Business will give their responses to the President's address.

General » Be a reporter: Write and send your article » Subscribe for news alert
Tags: State of the Nation Address, COVID-19