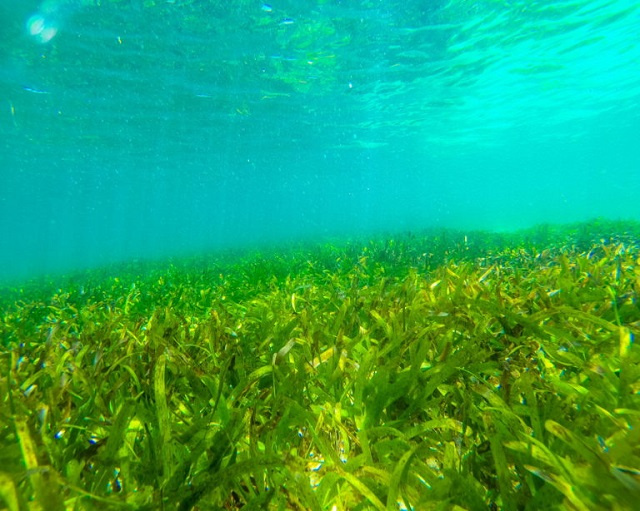 The exercise which is expected to end in May will determine where there are seagrass meadows in Seychelles pulling carbon out of the atmosphere and storing it as organic carbon. (Charlene Albert, SeyCCAT)

Seagrass ecosystems in certain areas close to Seychelles’ main island of Mahe have been badly managed while others need protection to prevent future damage indicates data collected in an ongoing mapping exercise, said the lead consultant.

Jeanne Mortimer told SNA that although seagrass ecosystems are abundant in Seychelles, some of the areas around Mahe have been greatly damaged by land reclamation projects.

“The problem with reclamation is that it completely destroys the meadow. We understand why the government needs to get more land, but they need to realise that they are trading off something that is valuable," said Mortimer.

Another cause for the loss of seagrass meadow is trampling and Mortimer said that when people are trampling around, anchoring boats, walking around at low tide, dragging fish traps among others, this also causes a lot of damage.

These findings are from a carbon mapping exercise in Seychelles which started in October 2020 to determine exactly how much carbon seagrass meadows are able to store.

The exercise which is expected to end in May will determine where there are seagrass meadows in Seychelles pulling carbon out of the atmosphere and storing it as organic carbon. Other than acting as shelter and feeding ground to some sea species and providing livelihood to locals, seagrass is efficient at trapping carbon that would otherwise escape in the atmosphere and cause climate change to worsen. They have been identified as more tolerant to climate change than coral reefs.

It is therefore important to protect and properly manage these meadows which will maximise their role in fighting climate change. Discussions are still ongoing on how the government of Seychelles, an archipelago in the western Indian Ocean, can put in place policies to manage and protect these areas.

The impact of climate change which can result in sea level rise is  a concern for Seychelles. It can not only affect the island nation's marine ecosystem hence its fishing industry, the second top contributor to its economy but also development alongside the coastline.

Furthermore, just one metre sea level increase in Seychelles could submerge many of its low-lying coralline islands and inhabited coastal areas on the inner granitic islands.

Already, the fieldwork for the mapping exercise around the main islands - Mahe, Praslin, and La Digue -  has been completed while on the list of outer islands there still remains Astove, Cosmoledo, Alphonse and St Francois.

Once ground-truthing work is completed, the data collected will be applied to the satellite map to interpret the data. Ground-truthing is the part of the study where researchers take pictures of the seabed while their GPS is being followed to ensure that the satellite imagery corresponds to what is actually found on the seabed for the given coordinates.

The exercise is funded by the Pew Charitable Trusts and is being coordinated by the Seychelles Conservation and Climate Adaptation Trust (SeyCCAT), in collaboration with a number of local and foreign partners.

The University of Oxford was contracted by Pew to coordinate the scientific mapping component of the project. The university is working with the German Aerospace Centre to produce the baseline satellite map that will be refined by the ground-truthing process.