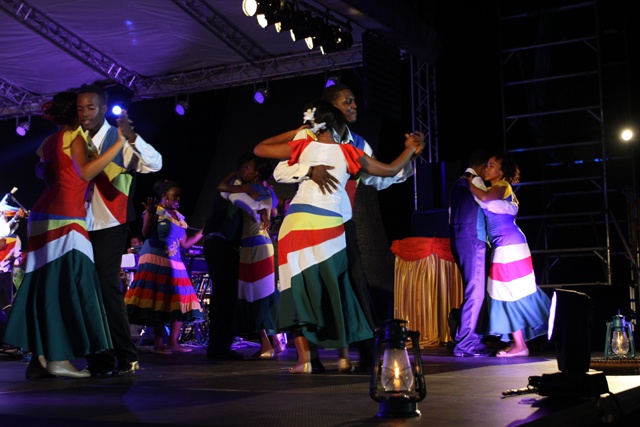 The National Dance Troupe. The opening ceremony of Festival Kreol was a two hour show with the participation of poets, dancers and singers from Seychelles, Mauritius, Reunion, Rodrigues and the Caribbean. (Joe Laurence, Seychelles News Agency)

(Seychelles News Agency) - The Seychelles capital of Victoria, ‘the Creole capital of the world’ was the stage of a display of the island nation’s creole identity Friday evening as the 29th Festival Kreol got underway at ‘Stad Popiler’ – a stadium in the centre of Victoria.

Many people, from Seychellois to visitors were entertained by the poems, songs, dance moves all depicting the Creole culture. The Seychelles President James Michel was amongst guests present at the opening ceremony of the Festival.

The evening also saw a performance by the French-Caribbean Zouk band 'Kassav', performing live in Seychelles for the first time in 23 years.

Jocelyne Beroad and Jacob Devarieux together with their musicians and dancers played one of their international hits - 'Zouk la sé sèl médikaman nou ni' (Zouk is our only medicine) giving those gathered a preview of what is to come Saturday evening when they will stage their own show for their Seychellois fans.

With their members originating from Guadeloupe and Martinique the Kassav band have this year  joined artists from other creole nations like Mauritius, Rodrigues and Reunion island – the French overseas department in the Indian Ocean that have converged to Seychelles for the annual Festival.

Expressing her joy to be present in Seychelles for this year’s Festival Kreol, Minakshi Thannoo, the Director of the National Heritage Fund of Mauritius said “I am sure it will be a successful event and will bring the Creole islands and their diverse culture closer together.”

“…From the Caribbean to the Indian Ocean we share the same DNA, yes we are far apart geographically but we are so close at heart,” she said.

Lacroix-Faveur expressed the desire for Reunion island to have its own Festival Kreol.

The French Ambassador to Seychelles Genevieve Iancu also brought her support to the festival showcasing her ability to express herself in Creole.

She called for the preservation of the Creole language and the Creole culture for the benefit of the future generation, a call that was echoed by the Principal Secretary for Culture, Benjamine Rose.

She urged everyone especially the youths to use Festival Kreol to deepen their knowledge of the Creole culture through forums, exhibitions and other events that are organised to ensure that the culture and tradition is passed on to the next generation.

The Seychelles Minister for Tourism and Culture Alain St Ange described Festival Kreol as the event that allows the Seychellois people to celebrate its identity, ‘the melting pot of culture’ he said that brings together the Indian, Chinese, British, French and African origins that make up the Creole people.

As the island nation marks the 29th Festival Kreol St Ange said next year the Festival needs to be taken to the next level.

“This year we have Kassav……next year we will surprise you, we will have Creole stars to help us celebrate the 30th anniversary.....” said St Ange.

The opening ceremony of this year’s Festival Kreol that was broadcast live on the National television, the Seychelles Broadcasting Corporation (SBC) lasted for around two hours and saw the participation of several Seychellois artists from Joe Samy, Despilly William, Jany De Letourdie amongst many others.

This was followed by a musical show featuring several artists and other activities including the sale of food and other items in Victoria.

On Saturday there will be the "Laserenad" a display of music and dance in the capital of Victoria.