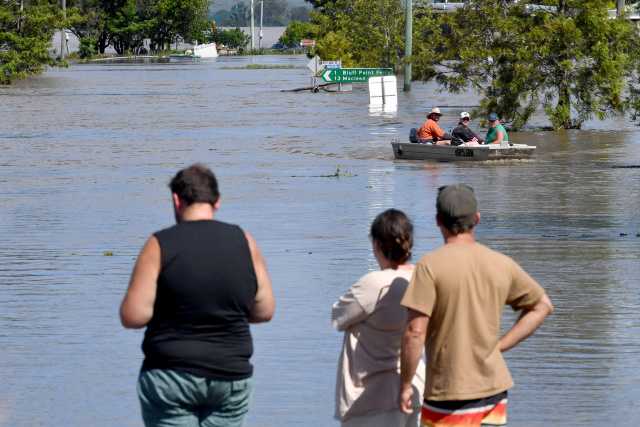 This picture taken on March 2, 2022, shows residents steering their boat through a flooded street in Lawrence, some 70 kms from the New South Wales town of Lismore. (SAEED KHAN / AFP)

(AFP) - Australia's emergency services ordered 200,000 people to flee from the path of a wild storm that lurched towards Sydney Thursday after killing 13 people in more than a week of record-setting floods along the east coast.

Authorities issued severe rain and wind warnings for a 400-kilometre (250-mile) stretch of coast as water levels rose rapidly -- including in suburbs around Sydney, Australia's largest city and home to five million people.

The unpredictable storm front has crawled southwards along the east coast from Queensland to New South Wales, creating havoc as rivers and reservoirs broke their banks with water swamping homes up to their roofs.

"Many people are waking up today to see much of our state underwater," New South Wales Premier Dominic Perrottet said.

"If you are subject to one of those evacuation orders, please get out," he told a news conference. "Things will get worse before they get better."

Authorities have ordered 200,000 people to evacuate their homes, and warned another 300,000 may soon have to join them.

The Warragamba Dam in southwestern Sydney, which supplies 80 percent of the city's water, has been spilling over since the early hours of Wednesday, accelerating the flooding in some areas.

New South Wales meteorologist Dean Narramore predicted the storm would dump 50-150 millimetres of rain during the day in areas including in and around Sydney, possibly more in areas struck by thunderstorms.

"That could lead to dangerous and life-threatening flash flooding," he warned.

Meteorologist Ben Domensino of Weatherzone said the storm was being fuelled by an "atmospheric river" -- a long stream of airborne moisture.

"Australia is at the forefront of severe climate change," said environmental expert Hilary Bambrick of the Queensland University of Technology.

In New South Wales, emergency services chief Carlene York said the storm was "difficult to predict" as she warned of a tough day across Sydney and other parts of the state.

Taronga Zoo, located along Sydney Harbour, prepared for an influx of injured wildlife from torrential rainfall and flooding.

The first fear was for young wildlife, small animals –- including echidnas and bandicoots -– and birds unable to escape surging floodwaters.

Heavy downpours can make birds' feathers so waterlogged they are unable to fly, a spokeswoman told AFP.

As the floodwaters recede, concern will turn to the animals living in fresh water, including platypuses.

Across New South Wales, flood levels have climbed to the highest level in decades.

In towns such as Lismore in the state's northeast, which is now cleaning up as floods recede, people had clambered onto their rooftops, sometimes waiting many hours to be rescued from rising waters.

New South Wales said it was sending an extra 400 personnel to that region to help people on the "very, very long road" to cleaning up and recovering.

He added that the state of more than eight million residents have been through a difficult three years of "drought, fires, floods, floods again on top of the pandemic".

"But our people have stood tall," Perrottet said.

General » Be a reporter: Write and send your article » Subscribe for news alert
Tags: Australia, floods