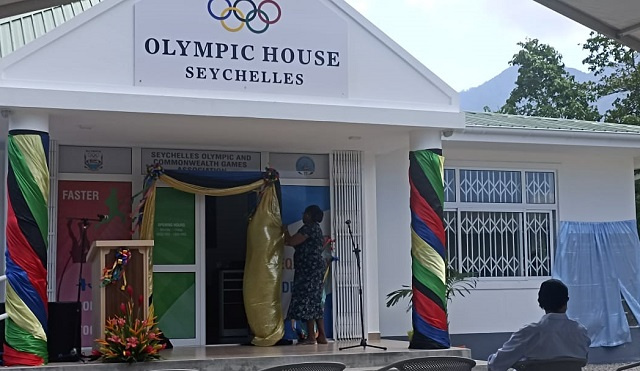 The Olympic House is located in the central Mahe district of Roche Caiman. (Sedrick Nicette)

(Seychelles News Agency) - Seychelles’ quest for an Olympic medal if not by 2024 then by the 2028 summer games has been given a boost with the opening of its first-ever Olympic House on Wednesday.

“Today is momentous for the sports community and not only for SOCGA… The development of sports is based on a collaborative effort and this is why we must work together to achieve our goals,” said Minister for Sports, Marie-Celine Zialor at the opening ceremony.

Seychelles launched an initiative in November last year, to identify talent and then support athletes with training and international exposure at high-level competitions, with the overall goal of bringing to the island nation an Olympic medal.

The Olympic House, located in the central Mahe district of Roche Caiman between the Stad Linite medical centre and Nature Seychelles headquarters, is the headquarters of the SOGCA and serves as a place where sports federations can hold their meetings and conferences.

There is also a research centre where all memorabilia and anything connected with the Olympics will be displayed, as well a large hall which can house up to 60 people for meetings and other functions.

Minister Zialor said that with the opening of the Olympic house, all partners should now collaborate more for the advancement of sports to a higher level in Seychelles, an archipelago in the western Indian Ocean.

Construction of the Olympic House started in 2020 after a decade in the making as SOCGA had to raise enough funds to finance the project.

The building of the Seychelles Olympic House cost SCR5.4 million ($267,000) and the International Olympic Committee and the Olympic Committee Association gave $100,000 while the government donated the plot of land. The rest of the funds were raised by SOCGA.

It is a norm for all member countries of the International Olympic Committee to have their own headquarters.

While thanking everyone who the project a reality, SOCGA’s President Antonio Gopal echoed the Minister’s call for everyone involved in sports to help bring Seychelles to a higher level.

Seychelles has been a member of the International Olympic Committee since 1979 and participated in the Olympic Games since 1980, missing only the 1988 edition. The nation has not yet won an Olympic medal.

The island nation has participated in the Olympic Games since 1980, missing only the 1988 edition. The nation has not yet won an Olympic medal.