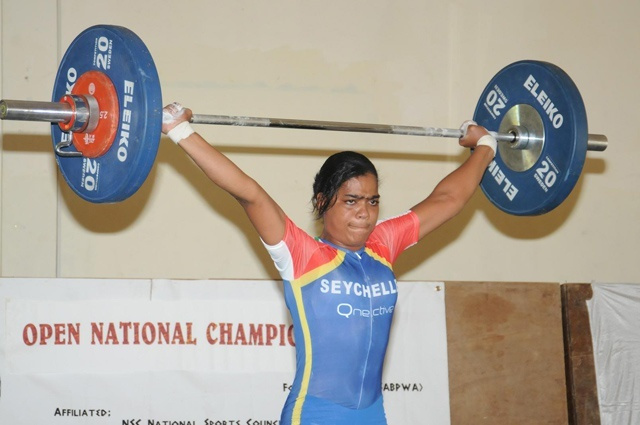 Agricole, a former Seychelles Sportswoman of the Year, clinched gold in the 59kg category with a total lift of 177kg. (Seychelles Nation)

(Seychelles News Agency) - Seychellois female weightlifter, Clementina Agricole, has increased her chances to get a spot at the upcoming Commonwealth Games in Birmingham after winning a gold medal in the international open weightlifting championship in Mauritius.

Agricole, a former Seychelles Sportswoman of the Year, clinched gold in the 59kg category with a total lift of 177kg -- 77kg in snatch and 100kg in clean and jerk.

A silver medal was won by Romantha Larue in the 87kg category with a total 155kg -- 70kg in snatch and 85kg in clean and jerk.

Ruby Malvina, also competing in the 59kg category came out third to win a total lift of 171kg --76kg snatch and 95kg clean and jerk.

The participation of the Seychellois female weightlifters in the championship was to seek a spot in the upcoming Commonwealth Games in Birmingham.

Seychelles Weightlifting Federation chairman, Robert Rose said, “The ladies did very well to win three medals, but now we have to wait and see. However, with a gold medal, it means that Clementina has a very high chance of making it to Birmingham.”

If Agricole, aged 33, qualifies this will not be her first Commonwealth Games. She participated in the international multi-sport event in Glasgow in 2014 and came out fourth just one spot away from a bronze medal.

The top eight lifters in the rankings will join the outright winners of the Commonwealth Championships, England's host nation selections, and bipartite invitations in fields of 11 and 12 for the 16 weight categories.

Seychelles, an archipelago in the western Indian Ocean, has been participating in the Commonwealth Games since 1990.

The only female weightlifter to have won a medal at the Games is Janet Thelermont who clinched a bronze medal in the Women's 69 kg class after lifting 205 kg (95 kg snatch, 110 kg clean and jerk) in Melbourne in 2006. She did one better in 2010 in Delhi and won a silver medal.

The total athlete quota of 180 places is exactly 50 percent more than the number allocated to weightlifting for Paris 2024 by the International Olympic Committee (IOC).

At the moment, only the winners in each category at the 2021 Commonwealth Championships, as well as one athlete in each weight category from the host nation England have guaranteed their spots at the games.

Sport » Be a reporter: Write and send your article » Subscribe for news alert
Tags: Commonwealth games, Sportswoman of the Year