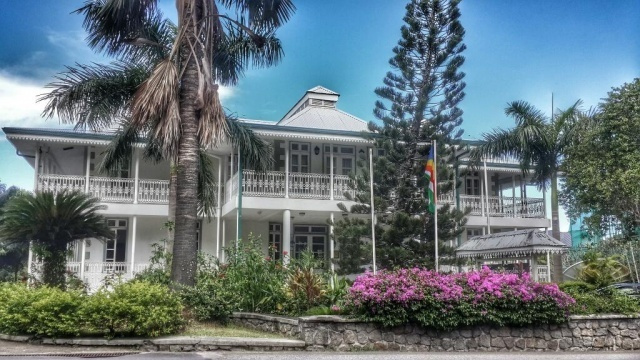 Sylvestre Radegonde told reporters that Seychelles confirmed its position through a vote on a UN resolution. (Seychelles News Agency)

(Seychelles News Agency) - Seychelles condemns Russia's attack on Ukraine as all countries need to operate within international rules and norms, the foreign minister said on Friday.

Sylvestre Radegonde told reporters that Seychelles confirmed its position through a vote on a UN resolution on March 2, condemning the invasion of Ukraine.

"We condemn what is happening and we are asking Russia to remove its forces from Ukraine, and we ask that all concerned parties settle the situation through diplomatic means and negotiations. This is a basic rule of the UN," he said.

The minister said that countries need to respect international rules and norms and this is in their national interest.

"If we don't do so, we are opening a door for another country to use any reason to come into our waters and capital and take over our country. We will follow international rules, and apply sanctions that the UN put in place. Up until now, there are no sanctions asking us to seize any vessels, prevent a plane from landing in the country, or seize one once it has landed," he continued.

Radegonde added that should the UN pass a resolution asking other countries to seize Russian assets found in the country, Seychelles will make its decision.

He stated clearly that Seychelles is not part of the war and is not fighting with Russian citizens. Many international media houses are interested in Seychelles' position on the war but Radegonde questions why the island nation's position was not sought on those that happened on the African continent recently.

"Seychelles remains a non-allied country and because of this, we have the freedom to speak and point out when there is something wrong while keeping in mind that we are a small country. We can get crushed really fast. I was conscious of this when I was talking to the Russian minister and relayed that we do not think they are respecting international rules. It is clear that there will be consequences regardless of the position you take," said Radegonde.

Seychelles' foreign minister met with Russia's deputy minister of industry and trade, Aleksei Gruzdev on March 2. The latter was in the island nation seeking support for Russia's candidature to host Expo 2030 in Moscow.

Russia is one of four countries that have asked for Seychelles' support in the bid, and Radegonde outlined that the country still has time to make its decision as voting will take place in 2023.

Diplomacy » Be a reporter: Write and send your article » Subscribe for news alert
Tags: UN resolution