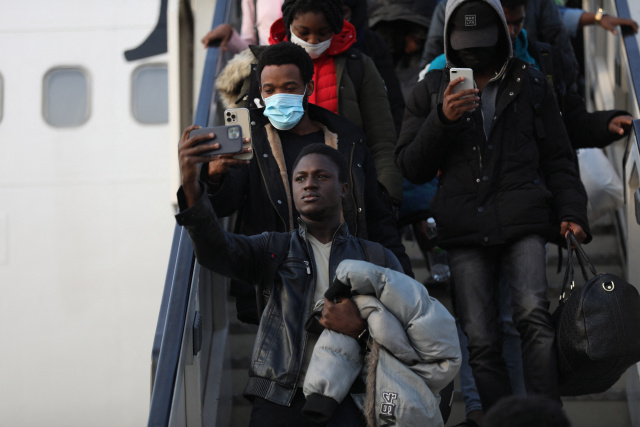 Nigerian students, who just got evacuated from Ukraine amidst the ongoing war between Russia and Ukraine, disembark from a chartered plane after landing at the Nnamdi Azikwe Airport Abuja, Nigeria on March 4, 2022. A first batch of 415 Nigerian students who were studying in Ukraine were flown back home on Friday, according to an AFP reporter at the airport in the capital Abuja. (Kola SULAIMON / AFP)

(AFP) - A batch of 174 Nigerians who fled Ukraine following the Russian invasion landed home late on Friday, bringing the total number of citizens evacuated to almost 600.

Earlier Friday, a group of 415 people, most of whom were students, arrived from Romania's capital Bucharest, one of the hubs from where African governments are scrambling to extract stranded citizens.

"The second batch of Nigerians (174) have arrived (in) Abuja from Poland," Nigerian airline Air Peace tweeted, bringing the total number to 589.

After landing in the capital Abuja, many among the first group to arrive looked tired but relieved that their ordeal was over.

"I'm very happy to be back home, thank you, Nigeria!" one young woman said as she walked off the tarmac and into the terminal.

As they filled out government forms, many still wearing their winter clothes, one student recounted his traumatic experience.

"There were a lot of heavy artillery, missiles, bombs and all that," said Oyewo Elisha, 22, who was studying in Kharkiv.

"My school, everywhere... it’s really bad. We couldn’t stay there."

Haroun Rukayat, 20, said she had to wait 14 hours in the cold before she was able to cross into Romania.

"I’m one of the lucky ones... some people are still stuck in different cities, especially in Sumy where the war is really going on," she said.

"I am thankful that I was able to get out."

Minister of Foreign Affairs Geoffrey Onyeama said there were about 5,600 Nigerian students in Ukraine and an estimated 8,000 Nigerian citizens in the country before the war.

On Monday he said an estimated 1,000 citizens were ready for pickup from Romania, 200 others in Slovakia, and 250 both in Hungary and Poland.

A million refugees have fled Ukraine so far, the UN said Thursday, warning that unless the onslaught ended immediately, millions more were likely to flee.

Ghana on Tuesday became the first African country to return its citizens, flying home 17 out of 500 stranded students.