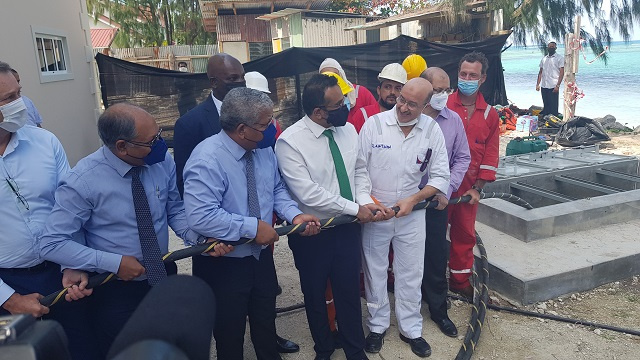 The second submarine cable, which will be connected to the Pakistan East Africa Cable Express (PEACE), landed on Monday at Perseverance in the presence of President Wavel Ramkalawan (3rd left). (Betymie Bonnelame, Seychelles News Agency)

(Seychelles News Agency) - A second submarine optic cable has landed in Seychelles and once it becomes operational in May, it will provide a secure and reliable internet connection, said a top government official.

The second submarine cable, which will be connected to the Pakistan East Africa Cable Express (PEACE), landed on Monday at Perseverance, a man-made island on the north-eastern coast of Mahe.

The principal secretary for information communication and technology, Benjamin Choppy, told reporters that the main objective of the cable is to ensure that Seychelles has security in international connectivity.

"For over 10 years, we had only one and this presented a risk for us if anything happens, especially today. If you look at the amount of traffic that we have on cable, over 95 percent is on the SEAS cable. If something went wrong it would be catastrophic," he pointed out.

The PEACE project being undertaken by the Seychelles Cable Systems (SCS) at a cost of $20 million, will act as a backup in connecting Seychelles, an archipelago in the western Indian Ocean, with the world through faster and more reliable internet.

Choppy said that the cable is a much bigger system, which is around 15,000 kilometres long and links directly with Marseilles in France.

"This means operators can access the capacity directly from Europe compared to now when they have to go through Dar Es Salaam and then move to another cable for their other destination," he added.

He said that the system is using the latest technology so its capacity is much greater than the one Seychelles has at the moment.

Although the second cable expects to provide a better and more reliable service, the cost of internet in the country will depend on the service providers.

The chief executive of Cable & Wireless, Georges d'Offay, told reporters that "with the second submarine cable we will see how we can provide a better service, one that is more affordable and, if possible, give the public double data for the same price."

Meanwhile, Airtel Seychelles' managing director, Amadou Dina, said that "this is another milestone for Seychelles and especially for Airtel because we have also invested in that joint venture. Obviously, our customers will benefit from this cable and we have already prepared for its arrival... We have already designed new products and it is, for now, a strategic move that I cannot disclose at this time."

"At that time, it was a feat for us to achieve it. It involved much effort and tenacity to pull it off. None of us could have predicted that 10 years on we would have landed the second cable. Here we are today, not only are we about to retire these loans but we have also managed to have a second submarine cable. Two cable systems for a small country the size of Seychelles in this time frame is an achievement," Choppy said.