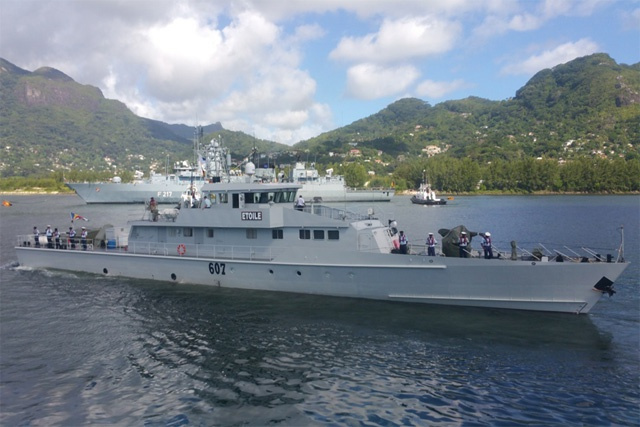 The Patrol Ship Etoile of the Seychelles Coast Guard assisted a dornier aircraft and the PS Le Vigilant in the operation. (Seychelles Nation)

The nationality of the vessel owners and crew were not disclosed. According to SFA, the Seychelles Coast Guard Maritime Operation Centre (MOC) received a report from fishermen on a local fishing boat saying they saw two foreign fishing vessels approximately 48 nautical miles northwest of Silhouette Island.

The foreign vessels were located by a Seychelles Air Force (SAF) Dornier aircraft and the Seychelles Coast Guard (SCG) patrol ship, Le Vigilant, and were assisted by patrol ship Etoile in the operation.

After SFA officers conducted boarding operations, the vessels were escorted to port Victoria and handed over to the Police for further investigation.

According to an SFA source, inspection and the gathering evidence are still ongoing and once completed, the case will be brought to court.

This is the first arrest of grounds of suspicion of illegal fishing in the Seychelles territorial waters this year.

In an interview with reporters last year, SFA's legal adviser, Yannick Roucou, said that since 2015, there were around 23 such illegal fishing cases in Seychelles, an archipelago in the western Indian Ocean.

He said that around 80 percent were Sri Lankan vessels and that such cases are increasing and occurring more frequently.

As a deterrent, in August last year, the Seychelles Supreme court imposed a heavy fine of SCR2.5 million - or $167,000 - on the captain of a Sri Lankan-flagged vessel intercepted in the waters of Seychelles who was found guilty for fishing without a foreign fishing vessel licence.

Seychelles has a vast Exclusive Economic Zone of 1.4 million square kilometres, which presents a challenge for monitoring illegal activities in the island nation's waters.

The island state is constantly looking at measures to improve maritime surveillance.