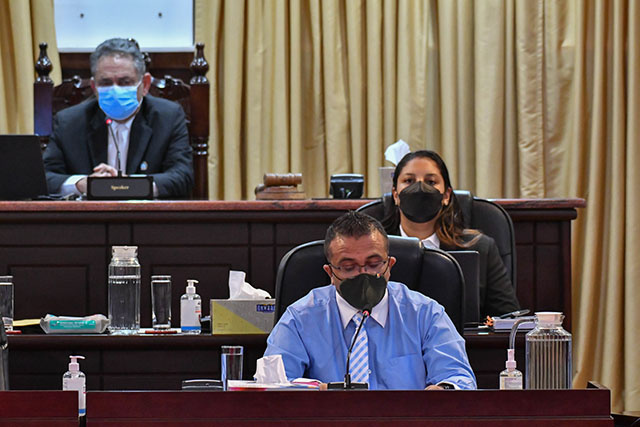 (Seychelles News Agency) - The government of Seychelles is considering several measures to curb the impact of the increase in prices of global commodities as a result of the ongoing conflict between Russia and Ukraine, said a top government official on Tuesday.

Seychelles' finance minister, Naadir Hassan, made a statement on this topic to members of the National Assembly, given the potential repercussions of the ongoing conflict between the two Eastern European countries.

Hassan said that two key factors that will harm Seychelles' economy are "a reduction in the stock of certain commodities globally and this will affect prices due to the demand. The prices of commodities will be influenced by the cost of transportation that is constantly increasing."

He said that the Ministry of Finance is meeting with key local partners to evaluate and monitor the impact of the conflict.

"We recognise that the population group with lower salaries will be more affected. Like I said last year in my address, we are working on reforms in the social assistance services. The government is now accelerating the reform with the aim to ensure that those who really need assistance will get it," said the Minister.

He added that the government is also discussing and evaluating different measures including the reform in the contribution to the Pension Fund on which an announcement will be made at a later date.

The Seychelles Pension Fund had announced plans to increase the mandatory monthly contribution from April 1 to sustain the retired fund payment, amid concerns about its solvency given the island nation's rise in life expectancy.

The minister said that an evaluation is underway to see the possibility of a salary increase as it was announced in his budget address in December.

"This measure will need to take into account the budget constraints that we are in, as we are in an economic reform supported by the International Monetary Fund," he added.

Seychelles, an archipelago in the western Indian Ocean, relies heavily on the tourism industry, the top contributor to its economy.

Hassan said that the increase in fuel prices will cause airfares to rise and this uncertainty will discourage people to travel.

"Tourism arrival that has been very promising at the beginning of the year, will go down and the taxes on revenue the government collects will also go down," he said.

At the end of February, visitor arrivals to Seychelles according to the National Bureau of Statistics (NBS) was 48,508 compared to the same period last year when only 1,551 tourists came to the island nation.

"The amount of foreign exchange on our domestic market for January and February was a total of $130 million. This is a considerable increase compared to $68 million recorded for the same period last year," said Hassan.

Seychelles was already on the path to recovery following the COVID-19 pandemic with positive projections for the rest of the year. The conflict between Russia and Ukraine has cast new doubts over the country's economic stability once more.

A direct impact of Russia's invasion of Ukraine on Seychelles is the fact that Russia's national airline, Aeroflot, has stopped all its international operations and that is expected to directly affect the island nation's current largest tourism market.

Russia topped Seychelles' tourism market with 32,000 of the total number of visitor arrivals of 182,849 in 2021, mainly due to availability of direct flights.

Furthermore, with Russia being the world's second-largest oil producer, this is likely to also impact oil prices and, as of March 8, the crude oil price had reached $122 per barrel, according to oilprice.com.

Hassan concluded by saying that "like the COVID-19 pandemic showed us, uncertainty in the world means as a country we need to be ready to depend more on ourselves."