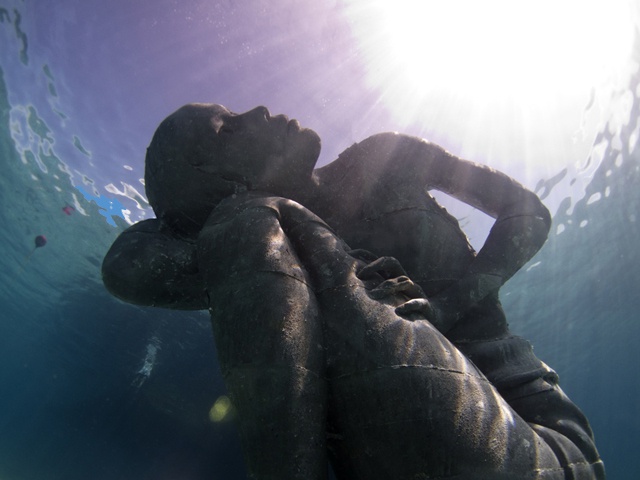 The 60-tonne 'Ocean Atlas' carries the weight of the world's oceans on her shoulders. (Jason DeCaires Taylor)

(Seychelles News Agency) - British-Guyanese sculptor Jason DeCaires Taylor has created what is believed to be the world’s largest underwater statue in Nassau, Bahamas. The 60-tonne artwork, entitled Ocean Atlas, represents a young Bahamian girl bearing the weight of the ocean on her shoulders.

The underwater colossus, modelled on a local student from the Bahamas named Camilla, kneels with her head resting on one knee, gazing off into the distance.

The title of the piece refers to the Greek mythological titan Atlas who held up the celestial spheres on his shoulders. The piece reportedly symbolises the burden of climate change which will primarily be borne by the future generations of many small island developing states such as the Bahamas.

This particular piece of Taylor’s was commissioned by the Bahamas Reef Environment Educational Foundation (BREEF) in honour of its founder, Sir Nicholas Nuttal.

According to Taylor’s website, his underwater sculptures are constructed using sustainable PH-neutral materials which encourage the settlement and growth of new coral recruits, creating artificial reefs on his artworks for marine life to inhabit.

The sculptures are also designed to draw tourists away from ecologically-sensitive and over-stressed natural reefs.

Although Taylor’s highly-detailed sculptures, fashioned from high-density concrete, are designed to last for hundreds of years, they lose their finer features after several years submerged under the ocean as their slightly porous surfaces slowly become colonised by corals, algaes and marine life.

Taylor has submerged hundreds of ghostly sculptures in barren, shallow waters throughout the world to create more awareness of environmental issues such as water pollution, over-fishing and global warming. His underwater works include a man sitting at a typewriter, a ring of children holding hands, and one of his most ambitious projects, the Silent Evolution, consisting of 400 life-size human sculptures which was designed to attract marine life and coral recruits on a large scale.

Taylor’s art, meant to metamorphose from cast stone into something more biological, conveys many different feelings, of loss, echoes of civilisations long gone, ideas submerged and forgotten – and a frightening harbinger of things to come if the effects of climate change are not taken seriously.