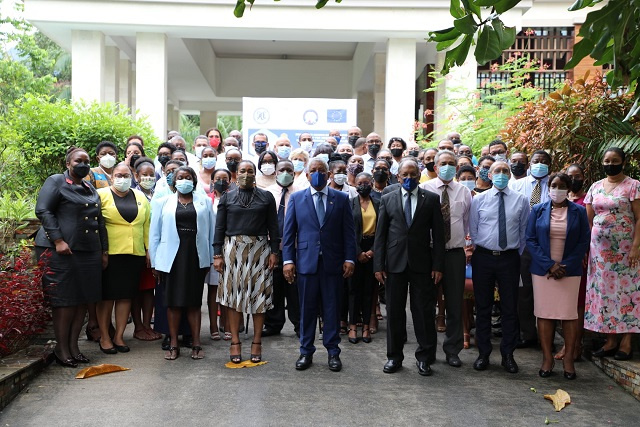 The participants at the sexual and gender-based violence workshop with President Ramkalawan. (State House, Facebook)

(Seychelles News Agency) - Members of the National Assembly are learning more about Seychelles' situation in terms of sexual and gender-based violence (SGBV), the relevant laws, and how they can be improved in a two-day workshop.

It is an initiative of the women's parliamentary caucus led by MNA Regina Esparon, the elected member of the northern Mahe district of Glacis with the support of the Southern African Development Community (SADC) secretariat and is funded by the European Union, the co-partner.

In his keynote address, the President of Seychelles, Wavel Ramkalawan, said, "We want to see an end to sexual and gender-based violence. We want to see respect and for everyone to grow in harmony."

Ramkalawan said that the workshop touches the fundamental human rights of everyone and places emphasis on the word respect and how from a very young age, children should be taught how to show respect.

"As leaders of this country, I count on you to lead and sensitise our people to maintain standards that will help restore, in some instances; the harmony that we long for and transform our society and our people into a peace-loving people," said Ramkalawan.

Meanwhile, MNA Esparon provided statistics to support the fact that the issue of gender-based violence is one of the taboos of society and that the situation has more or less remained the same "since time immemorial."

Furthermore, 172 women out of the study's 1,560 respondents reported having experienced physical intimate partner violence and 78 percent of women confirmed that they experienced some form of abuse before they reached 18 years.

Esparon pointed out that on the other hand there is a very low prosecution rate for sexual and gender-based violence crimes locally and that a large number of inmates being either detained or serving time at the Montagne Posée prison were convicted on charges related to gender-based violence, ranging from rape through to manslaughter.

She added that cyber violence against women and children in Seychelles is on the rise.

At the end of the workshop, the MNAs are expected to make recommendations on motions or amendments to legislation on sexual and gender-based violence, which will need to be brought before the National Assembly.

General » Be a reporter: Write and send your article » Subscribe for news alert
Tags: sexual and gender-based violence, National Assembly