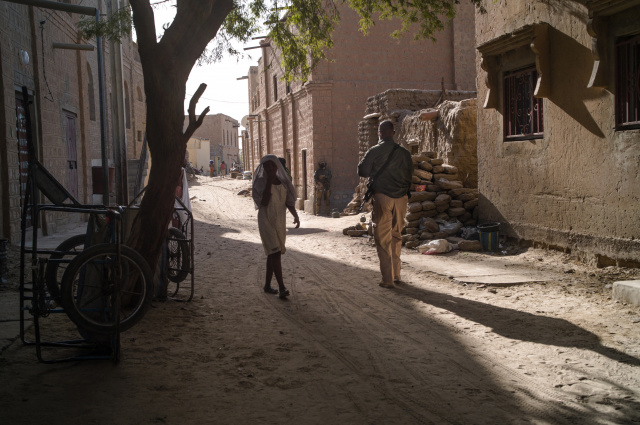 A member of the MINUSMA (United Nations Multidimensional Integrated Stabilisation Mission in Mali) walks in an alley in Timbuktu on December 6, 2021. Mali says it has banned civilians from a border area where the disappearance of citizens from Mauritania -- blamed by social media on Malian troops -- has stoked tensions between the two neighbours. (Florent VERGNES / AFP)

(AFP) - Mali says it has banned civilians from a border area where the disappearance of citizens from Mauritania -- blamed by social media on Malian troops -- has stoked tensions between the two neighbours.

In a statement late Sunday issued after Mali dispatched envoys to Mauritania, government spokesman Colonel Abdoulaye Maiga announced, "The military authorities have decided to strictly forbid any movement by civilians in the Wagadou forest and Gringale forest zones."

Social media in Mauritania have accused the Malian army of killing civilians in a border area south of Adel Bagrou, a town in the southeast of the country.

Mauritania's government has accused the army of "recurring criminal acts", but not given further details.

A high-level Malian delegation was in Nouakchott, the Mauritanian capital, on Friday and Saturday in a bid to ease friction.

The two sides agreed to set up a joint investigation into the disappearances and set up joint patrols in the border area.

Maiga, in his statement, said the Wagadou and Gringale zones lay in an area where the Malian military had been conducting anti-jihadist operations since December.

But, reiterating Mali's previous positions, Maiga said that the army had had nothing to do with the disappearances.

"On the basis of technological evidence, it emerges that no FAMA (Malian armed forces) patrol was present in the zone at the dates given," he said. "At present no evidence supports incriminating our courageous FAMA."

Separately, the prosecutor to the military court in Bamako, the Malian capital, announced that an investigation into the disappearances would be carried out by gendarmes.

The statement did not give further details -- two series of disappearances have been reported, in January and early March.

The authorities had previously promised to investigate the disappearances in January, but any outcome from that probe has not been made public.

A Mauritanian MP says at least 15 people had been killed, while unverified voice recordings on social media quote witnesses as blaming the Malian army for the disappearance of as many as 30.

Mali and Mauritania are key countries in the poor and troubled Sahel region of West Africa.

The military junta in Bamako seized power in August 2020, toppling elected president Ibrahim Boubacar Keita after a wave of public protests over his handling of a jihad insurgency.

The country's poorly equipped armed forces are struggling with jihadist insurgents, ethnic violence and criminal gangs. Allegations of abuse by troops are common.

In the run-up to the latest incident, the junta had been seeking closer ties with Mauritania to help ease the impact of an embargo by Mali's neighbours over failures to meet a promise to stage elections.