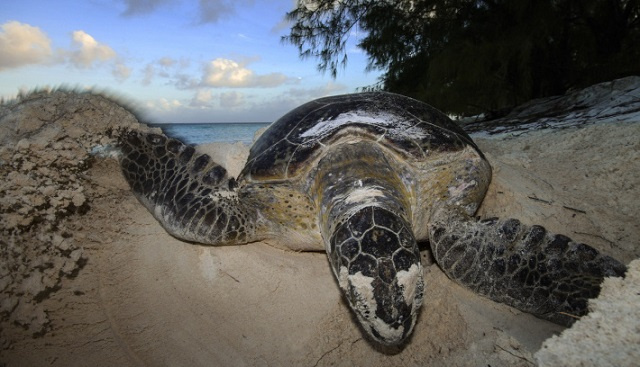 (Seychelles News Agency) - Green turtle recovery on Seychelles' Aldabra atoll - a UNESCO world heritage site - is continuing to increase and the most prominent growth is at Settlement Beach, according to data from over 50 years of monitoring published recently in a study.

Since a ban on the hunt of sea turtles was introduced in 1968, the estimated number of eggs laid has increased by 410 to 665 percent. This makes Aldabra an atoll with the longest-running protection programme for nesting green turtles in the western Indian Ocean.

The green turtle population was monitored through the calculation of the number of clutches of eggs laid each year. Carried out by a team of researchers from the Seychelles Islands Foundation (SIF) in collaboration with the University of Exeter in the UK, the study showed an increase from 2,000 to 3,000 turtles per year in the late 1960s. It reached over 15,000 per year in the statistics of 2014 to 2019.

The results were published on March 3 in a scientific paper called 'Green turtle population recovery at Aldabra Atoll continues after 50 years of protection' in the journal Endangered Species Research, which was lead by University of Exeter MSc graduate Adam Pritchard.

The most experienced expert in turtle conservation in Seychelles, Jeanne Mortimer, an American marine scientist who settled in the island state, told SNA that the study shows that protecting turtles at the nesting beaches is extremely important and it does work, but it takes time since a turtle takes up to 30 years to become an adult.

"One thing is not to kill the female and the other is protecting the nesting beach. This is a problem in a lot of places in Seychelles, especially on the inner islands as there is a lot of hotel development where turtles like to nest. Even if the hotels love turtles, it is not necessarily compatible with nesting," added Mortimer, who is warmly known across the islands as 'Madame Torti' or Madam Turtle for her dedication to turtle conservation.

She explained that turtles might get scared if there are people running up and down the beach.

"Aldabra has been able to deal with both, protecting the nesting beach and not killing the turtles, and as such, they have had great success," said Mortimer.

She added that there is no way to speed up the process because growing sea turtles in captivity are not going to help as doing so will produce sick animals.

"Nature needs to take its course and not hunt them when they come up to nest," she added.

One of the co-writers of the study, Cheryl Sanchez, outlined that the study demonstrates the importance of long-term monitoring, which is often seen as less glamorous and valuable than targeted research.

"It has taken decades of tireless commitment to collect the data to confirm this increase and the foresight to protect the nesting population before it was too late. Aldabra's green turtles should continue to be an incredible conservation success story that we can follow for decades to come," said Sanchez.

The increase in the number of eggs laid was recorded at five monitored beach groups around the atoll. The greatest increase was observed at Settlement Beach, which was historically the area where the exploitation of nesting females was most frequent.

Green turtles, which breed all year round are classified as endangered on the Red List of the International Union for the Conservation of Nature (IUCN).

In Seychelles, an archipelago in the western Indian Ocean, sea turtles are protected under the Wild Animals and Birds Protection Act, under which the Wild Animals (Turtles) Regulations enacted in 1994, completely bans all disturbances, harvest, sale, possession of turtles, turtle products or eggs.