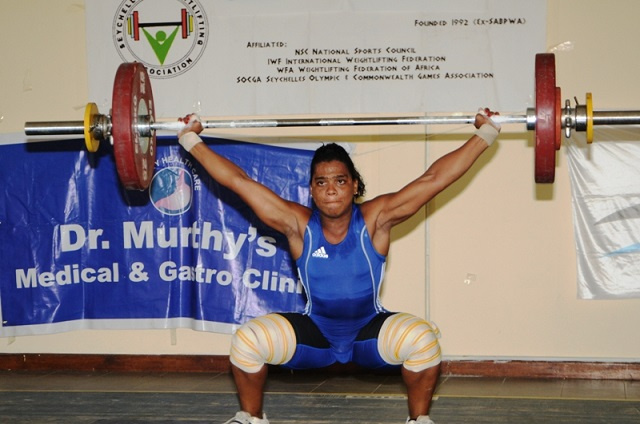 Agricole clinched a spot in the games after winning a gold medal at the 2022 Mauritius International Open Weightlifting Championship in February. (Seychelles Nation)

(Seychelles News Agency) - Seychellois female weightlifter Clementina Agricole is back on track to take her fifth shot for a medal at the 2022 Commonwealth Games scheduled to take place in Birmingham in July, as she has officially qualified to compete.

Agricole clinched a spot in the games after winning a gold medal at the 2022 Mauritius International Open Weightlifting Championship in February.

There was a nominal total of 180 quota places available for weightlifting and with a gold medal, Agricole's ranking got her a spot among the 90 women of the Commonwealth member nations.

Agricole, although happy to have claimed a spot, told SNA that "I am a bit stressed at the moment, as I am supposed to be in intensive training, but so far I am behind, although I am looking to fund myself as I look to continue my training overseas."

At the moment, she is training locally with a French-Lebanese coach Zaher Hamdan, although she hopes to travel to France soon, before possibly heading to the U.S. to train with American coach Kyle Pierce.

The 33-year-old, who has twice won the 'Sports Woman of the Year' title in Seychelles, is hoping to do better at this year's games.

"That elusive Commonwealth Games medal is still haunting me, but I remain positive as I want to win it," Agricole added.

This will be her fifth Commonwealth Games and she has yet to win a medal. She came close in 2010 in New Delhi but had to forfeit after injuring her elbow and then fell ill. She was diagnosed with a brain tumour and had to operate. Four years after her surgery, she came back in the games to finish fourth, missing out on a bronze medal.

Another female weightlifter from Seychelles, Romentha Larue, has won a bi-partite invitation to the games after her winning a silver medal in the Mauritius competition.

"I am very happy since it will be my very first participation at the games and so I am looking forward to gaining the experience, although I am not expecting a medal," Larue told SNA.

Larue will compete in the 87kg category in which she lifted a total of 155kg - 70kg in snatch and 85kg in clean and jerk in the tournament in Mauritius.

She also expects to start intensive training for the games, which will take place in Birmingham from July 28 to August 8.

The only weightlifter from Seychelles, an archipelago in the western Indian Ocean, to have won Commonwealth Games medals is Janet Georges. In the 2006 edition held in Melbourne, Australia she won a bronze medal and in India in 2010, Georges bettered her result by winning a silver medal.

The island nation has been participating in the Games, an international multi-sport event for members of the Commonwealth, since 1990 and has yet to win a gold medal.

Sport » Be a reporter: Write and send your article » Subscribe for news alert
Tags: Commonwealth games, Sports Woman of the Year