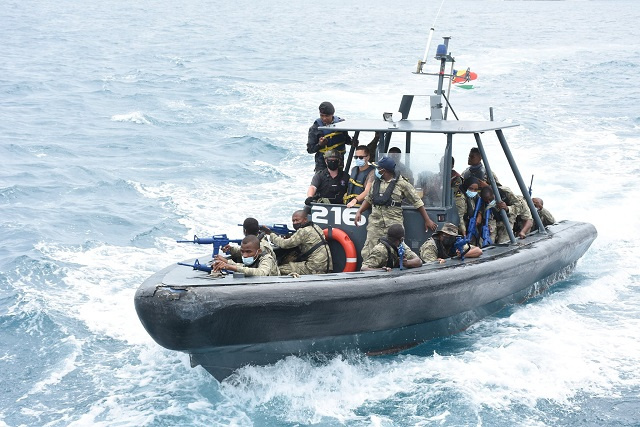 Rosette said that this amendment will provide more law enforcement on the outer islands where there is almost no presence of the police. (Seychelles Nation)

(Seychelles News Agency) - An amendment to the Constitution of Seychelles to allow military personnel to assist the police without the need for a state of emergency is being discussed by the Attorney General's (AG) Office and the Seychelles Defence Forces (SDF).

A first meeting was held on Thursday via Zoom between the two parties in the presence of local reporters.

The amendment to the Constitution proposed by the AG's Office is to remove the section stipulating military personnel may assist the police in instances of national emergencies.

State Counsel Stefan Knights told reporters that the AG's Office initiated the move for these changes and has presented them to the cabinet of ministers.

"The proposal was brought by the AG [Frank Ally] when looking at the cases that we have before the court. We have a number of drug cases as well and we just wanted to make this clear to everyone, especially when you are dealing with the non-Seychellois in the maritime zone," said Knights.

Chief of the Seychelles Defence Forces, Brigadier Michael Rosette, said that "we must not only look at the work the police are doing on the three main islands. This amendment will provide more law enforcement on the outer islands where there is almost no presence of the police."

Rosette revealed that SDF will put certain protocols in place outlining when it will assist and when it will not.

"We are not replacing the police, but rather if there are certain gaps, that we can assist the police when we do come in," he added.

This is not the first time changes are being proposed and made to the laws governing the Seychelles Defence Forces.

Military personnel have been assisting the police since Seychelles went into a public health emergency and imposed restrictions on movement in April 2020 to curb the spread of COVID-19.

Furthermore, in May 2020 changes were made to allow the Seychelles Coast Guard to provide assistance in a wide range of activities, such as search and rescue, port state control, as well as the work against human trafficking and drug smuggling.

Other parties in the discussions to amend the Constitution will be included, such as the Office of the Ombudsman and the Human Rights Commission, who were unable to attend the online meeting due to internet connection problems.

Once all the partners have given their input, a bill will go before the National Assembly for approval.

This will be the 10th amendment made to the Constitution, the supreme law of Seychelles, an archipelago in the western Indian Ocean, which came into force in 1993.