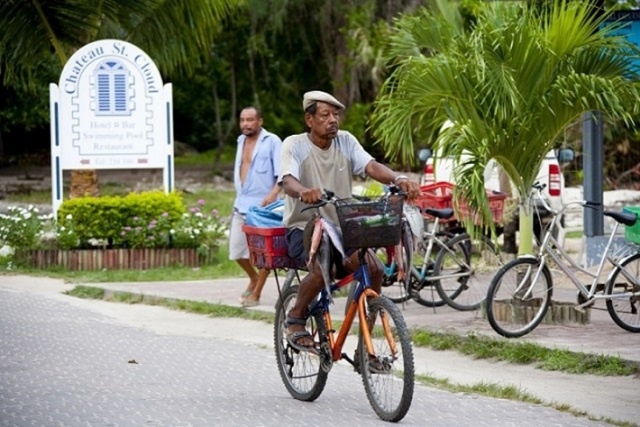 The main mode of transport on La Digue remains bicycles and they will have to be properly licensed and insured in order to be used. (Gerard Larose)

(Seychelles News Agency) - Changes have been made to the transportation regulation for Seychelles' La Digue Island to make the place more environmentally friendly, a top official said on Thursday.

Unlike on Mahe and Praslin, the two most populated islands of Seychelles, the main modes of transportation on La Digue island are mostly bicycles, cars and golf carts.

La Digue is a popular tourist attraction as it offers clearer air and a slower pace of life and to protect that unique aspect of the island, a revision of its transport policy has been worked on. Several changes have been made to ensure that vehicle usage is better regulated.

The island has over 100 cars and one mode of transport that has become popular in recent years is the club car. Club cars are being used as taxis although not this is not in the legal framework. There are currently 46 club cars on La Digue.

"We have noticed that there is a large number of tourists on the island and the 8 currently licensed taxi operators will not be able to cater for all of them, so we will allow 12 club cars to also run the service alongside them," said Patrick Andre, the transport department principal secretary.

Under the new policy, up to 12 club carts will be allowed to operate as taxis with the rest used for other purposes by their respective establishments and there is a moratorium on the purchase of new ones.

While there are certain services that will continue to use petrol-powered cars, such as emergency services, sewages trucks and other commercial services, the department said that current taxi drivers on the island will not be able to operate any vehicle that is older than seven years.

"When the taxi drivers' current vehicle is over two years old, they will have to buy a new car and that new car according to the new policy will have to be either a hybrid or full-electric," said Andre.

Meanwhile, the main mode of transport on La Digue remains bicycles and they will have to be properly licensed and insured in order to be used, while only electric bikes of up to 300 watts will be permitted on the island.

Under the new policy, only people 16 years and above will be permitted to use electric bikes, and helmets must be worn at all times.

"While electric bikes will be allowed, petrol-powered motorbikes and scooters are still not permitted on the island," Andre said.

The new policy, which incorporates road infrastructure and transportation services, was approved by the cabinet of ministers in February.

Further talks will be held with La Digue residents soon, where they will be briefed on the revisions before the policy comes into force.

A plan to make La Digue, the eco-capital of Seychelles, an archipelago in the western Indian Ocean, was drafted in 2015 with the expertise of the Indian Ocean Island Commission. Since then, various initiatives have been undertaken to transform the island with a population of around 3,000, into the country's eco-capital, including the introduction of clean energy vehicles.