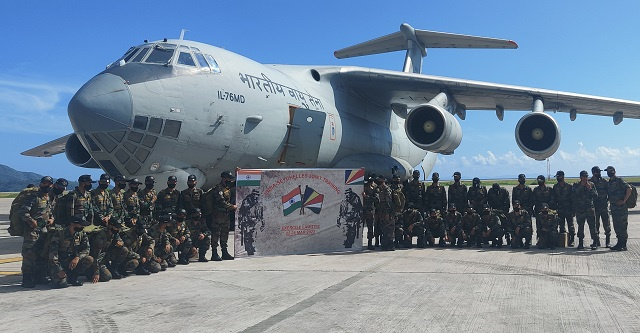 Improving the ability for defence forces to work with each other as well as better comprehending and practicing validated drills are the aims of a 10-day joint military exercise between the Seychelles Defence Forces (SDF) and the Indian Army which kicked off on Tuesday, according to an SDF press release.

Dubbed 'Lamitye-2022' - 'lamitye' being the Creole word for friendship - the exercise also seeks to improve procedures and amalgamation of new technology in sub-conventional operations through situation-based discussions and tactical exercises, the Seychelles forces said.

SDF Chief of Defence Forces Michael Rosette outlined that the biennial exercise is an important event in the defence cooperation between the two nations.

"It has contributed immensely in strengthening bilateral military cooperation and interoperability between both armies. The two militaries share a long history of friendship, mutual respect and understanding of each other. We are proud to host this exercise," said Rosette.

During the ninth joint military exercise between Seychelles and India, the two forces will undertake field training exercises, combat discussions, and lectures and demonstrations. The exercise taking place between March 22 to 31, will culminate into a two-day validation exercise.

Intending to build and promote bilateral military relations, the exercises provide participants of both sides with the opportunity to exchange skills, experiences and good practices.

Both forces will jointly train, plan and execute a series of well-developed tactical drills. These will include neutralisation of likely threats that may be encountered in a semi-urban environment while exploiting and showcasing a new generation of equipment and technology for conducting joint operations.

According to the SDF press release, the military exercise, initiated in 2001, also aims at strengthening the bonds of friendship between the SDF and the Indian military in the island nation.

'Lamitye' is part of an agreement aimed at strengthening the two forces' ability in carrying out counterinsurgency, counter-terrorism, and anti-piracy operations.

Seychelles, a group of 115 islands in the western Indian Ocean, has long been a strategic military location for world powers namely India, France, the U.K. and the U.S., as a safe port of call for their naval forces to refuel and rest, but also as a surveillance post for maritime and intelligence activities in the region.

The island state has long-standing military cooperation with these countries and relies on their assistance in surveillance of its vast Exclusive Economic Zone of 1.4 million square kilometres.

India is one of Seychelles' oldest and closest military partners, having provided patrol ships, aircraft and helicopters to its defence forces over the years since the country gained independence from Britain in 1976.

However, in July 2021, Seychelles – a member of the Non-Aligned Movement – turned a page in its diplomatic history by signing its first ever bilateral maritime agreement with the U.S. government, effectively allowing U.S. naval forces to work on Seychelles' military vessels and vice versa, in maritime operations.