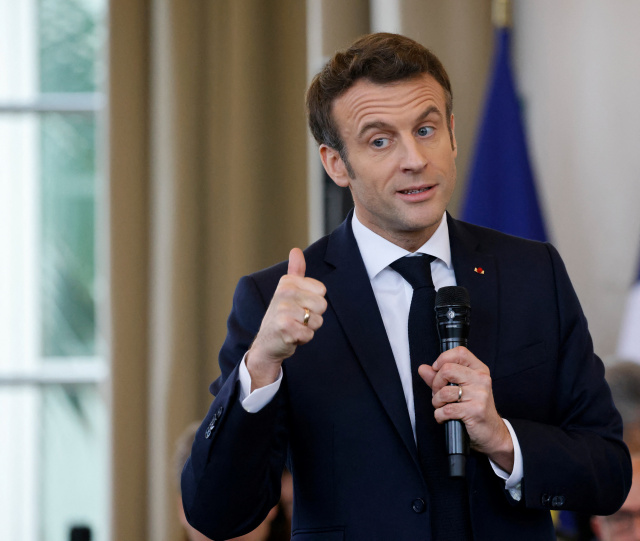 France's President and liberal party La Republique en Marche (LREM) candidate to his succession Emmanuel Macron gestures as he speaks during a debate with readers of the local daily press (Presse quotidienne régionale-PQR), at the Palais Beaumont in Pau, southwestern France, on March 18, 2022, as part of his political campaign ahead of the April 10/24 presidential election in France. (Ludovic MARIN / AFP)

(AFP) - Jean-Luc Melenchon, a divisive but charismatic 70-year-old leftist, is in possible contention to make a French presidential election run-off against Emmanuel Macron as traditional socialist forces fall by the wayside.

With Macron way ahead in polls for the first round on April 10, far-right leader Marine Le Pen remains favourite to make the second round, but analysts give far-leftist Melenchon a chance if he can maintain his current momentum.

While other leftist candidates are stagnating or losing ground, Melenchon -- who has likened himself to a "sagacious tortoise" -- is steadily progressing towards the finishing line.

"This tortoise has already overtaken quite a few hares," he told supporters this week.

Meanwhile, Socialist party candidate Anne Hidalgo, the mayor of Paris, has seen her poll ratings melt down and the campaign of Green candidate Yannick Jadot has yet to ignite.

"He (Melenchon) is the only figure that's left standing, a charismatic figure who's managing now, it seems, to mobilise larger parts of the left than one would have expected," said Philip Golub, a professor of political science and international relations at the American University of Paris.

"He has the ability to connect to the left-wing populations that find themselves orphaned as far as their traditional parties are concerned," he told AFP.

Cluster17, an opinion analysis institute, now has Melenchon at 14.5 percent of voting intentions, up from around 12 six months ago, while some recent polls even see him above the 15-percent mark.

Many polls, meanwhile, credit Le Pen with intentions in the high teens, but Cluster17's president Jean-Yves Dormagen told AFP that her voting score has in the past often fallen well short of predictions.

"If this is the case again this time around, she may get 14 or 15 percent instead of the 18 or 19 that people are expecting," he said.

"So we can't rule out that the qualification threshold is around 15 percent, in which case Melenchon could get in."

In the last election in 2017, Melenchon, who heads the "France Unbowed" party, won 19.6 percent of the first round vote, coming in fourth.

A repeat of a similar score now seems unlikely, partly because Melenchon has lost much working-class support to Le Pen, but also because he has alienated some voters with a number of conspiracy theories and his apparent support for Vladimir Putin in the run-up to the Russian invasion of Ukraine.

His anti-German positions, meanwhile, would not sit well with France's biggest partner in the European Union, and his anti-American rhetoric now seems at odds with increasing French cooperation with Washington within NATO.

"Only 16 percent of French people believe that Melenchon projects a positive image of France abroad," said Gilles Finchelstein at the Fondation Jean Jaures, a left-leaning think tank. "Only 20 percent believe that he's got the right stuff to be president," he said.

Even his own activists admit that Melenchon does not always make it easy for them.

"I'm not a great fan of the man, but I'm a great fan of his programme," Anne, 37, told AFP at a Melenchon election rally that, according to organisers, drew 100,000 people on Paris's Place de la Republique.

"He can be a bit polarising sometimes, but he's got integrity," said Hugo, 40, at the rally.

Melenchon has vowed to cut the statutory retirement age to 60 years from 62, while Macron has announced plans to raise it to 65.

"This election is a social referendum," Melenchon told the rally. "Never forget that a different world is possible."

But a Melenchon victory over Macron is almost impossible, pollsters say, with the president currently polling at over 27 percent for the first round and projected to beat any rival in the second round.

"It's unlikely that Melenchon would win in the second round, but he would offer a political and intellectual alternative that we haven't seen in France for a long time," said Golub at AUP. "It would definitely be interesting."