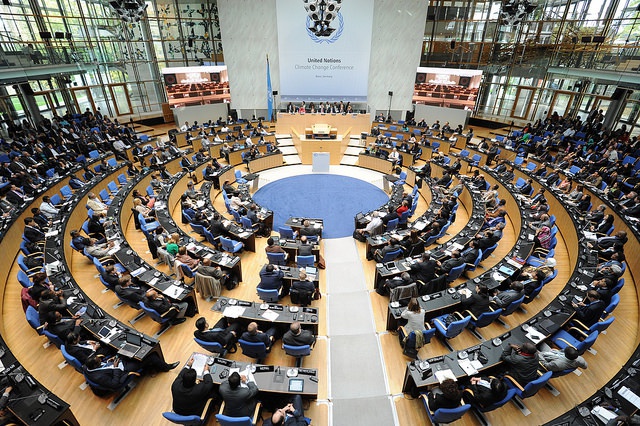 Almost 1,200 negotiators gathered at the UNFCCC's headquarters in Bonn, Germany last week to hammer out details for the next step of the climate change talks to take place in Lima, Peru in December. (UNFCC/Flickr)

(Seychelles News Agency) - The United Nations climate talks in Bonn, Germany last week were meant to lay the foundations for a binding, global pact to fight climate change, but an apparent lack of concern has meant that little was achieved when the talks closed on Saturday.

Over the past week, nearly 1,200 negotiators from 176 countries and other organisations such as civil society groups gathered in the former West German capital at the headquarters of the secretariat of United Nation Framework Convention on Climate Change (UNFCCC).

According to Agence France Presse (AFP), the Seychelles ambassador for climate change at the UN and spokesperson for the Alliance of Small Island States (AOSIS), Ronny Jumeau, has said that the upcoming ministerial talks due to be held in Lima, Peru this December would be difficult.

"We will clearly have our work cut out for us in Lima," he said, adding that an adequate deal would likely not be reached unless developed nations were willing to give details of financial and technical support for the climate mitigation and adaptation plans of developing states.

The 2015 pact will seek to limit average global warming to two degrees Celsius, as current research projects that at the current level of global warming, Earth could experience double this limit.

On Friday, a group of developing countries, including major greenhouse gas emitters India and China, called for ‘actual negotiations’ to begin, complaining that time was being wasted on conceptual discussions rather than the actual business at hand.

There are just 14 months left for the world’s nations to agree on a legally binding accord in Paris at the end of next year to cut carbon emissions and share responsibility for climate action.

Negotiators and observers alike have criticised participants for re-hashing well-known country positions, leaving the progress of forming concrete decisions to amble along at a snail’s pace.

Identifying information essential for agreeing on Intended Nationally Determined Contributions (INDCs) – the individual pledges to be submitted by member countries for curbing greenhouse gas emissions – in Lima was delayed by a widening divide between rich and poor nations over what should be included in the INDCs.

Many developed countries are arguing for a greater focus on direct actions to reduce greenhouse emissions.

Negotiators are also reportedly at loggerheads over how to agree on the collective responsibility of bearing the costs of fighting climate change, with vulnerable developing countries defending the belief that the biggest carbon emitters should bear greater responsibility for their actions.