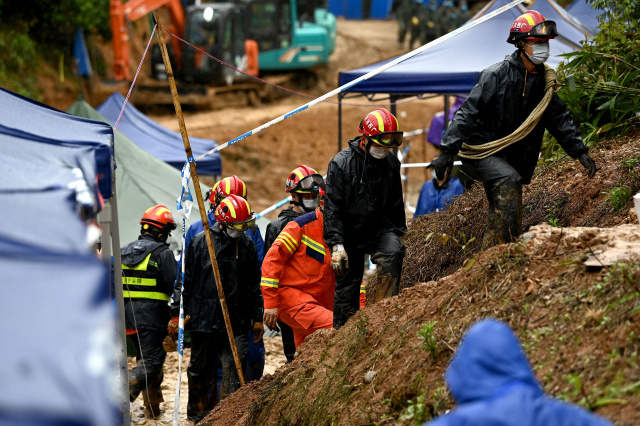 (AFP) - Recovery teams deployed drones and thermal imaging equipment Thursday across a mountainous area where a China Eastern plane inexplicably crashed with 132 people on board.

Four days after flight MU5735 ploughed into rugged terrain near Wuzhou in southern China, officials are still yet to declare all of the 123 passengers and nine crew dead.

More human remains have been found, officials confirmed on Thursday, but the velocity of a crash which punched a crater into the muddy ground and scattered plane parts and passenger belongings across a wide area, has complicated recovery work.

"Most of the aircraft wreckage is concentrated in a core area within a radius of about 30 metres from the main impact point," Zhu Tao of China's aviation authority told reporters.

"The depth extends down from the surface to about 20 metres."

Monday's crash is almost certainly China's worst air disaster in three decades and President Xi Jinping was swift to order a full investigation into what happened.

Wiping tears from her eyes, her arms supported by two men, a distraught relative arrived at the entrance point to the crash area on Thursday morning, according to an AFP reporter.

Under pouring rain, she joined scores of firefighters, paramilitary police and reporters to trudge across the rough terrain to where eviscerated chunks of jet have been found -- the result of the plane's as-yet-unexplained nosedive to the ground.

Hundreds of relatives of victims have arrived in the southern Chinese city, awaiting confirmation of their worst fears.

Despite the odds, searchers on Thursday were yet to rule out finding people trapped on the densely forested, mud-slicked slopes.

The "mission is mainly focused on searching for victims and saving lives", Huang Shangwu, of Guangxi Fire and Rescue Force, told reporters, citing instructions "from headquarters".

"We are using thermal imagers and life detectors to search the surface... we also use manual searches and aerial drones."

At the same time, teams are scouring the landscape for the remaining black box -- after a damaged voice recorder was recovered on Wednesday and sent to Beijing for analysis.

Experts hope it will yield clues to the cause of the crash, which saw the Boeing plane -- flying between Kunming and Guangzhou -- drop tens of thousands of feet in just minutes.

State broadcaster CCTV showed rescuers lifting what appeared to be a chunk of the aeroplane's wing as they expanded the search area.

Pieces of engine are also among the wreckage recovered, according to state news agency Xinhua.

The stricken jet was equipped with two recorders: the cockpit voice recorder and the other one in the rear passenger cabin tracking flight data.

China Eastern also confirmed at a Thursday press conference that it had grounded all 223 of its Boeing 737-800 aeroplanes for safety checks, as the airline launches a safety overhaul following the crash.

The safety message has rippled out across sectors. A notice from the State Council and Ministry of Emergency Management on Wednesday called for industries across the board to "rectify potential safety hazards".

US officials -- Boeing is an American company -- were also waiting for clearance to enter China, according to the US National Transportation Safety Board.

"We are working with the Department of State to address those issues with the Chinese government before any travel will be determined," it told AFP Thursday.

In an apparent effort to address speculation over how a jet only relatively recently brought into service could have suddenly dropped from the sky, aviation authorities have revealed a few details on the crew.

There was a second co-pilot on board, with more than 550 hours of flight time and all three were in good health with no known personal problems.

General » Be a reporter: Write and send your article » Subscribe for news alert
Tags: China, accident