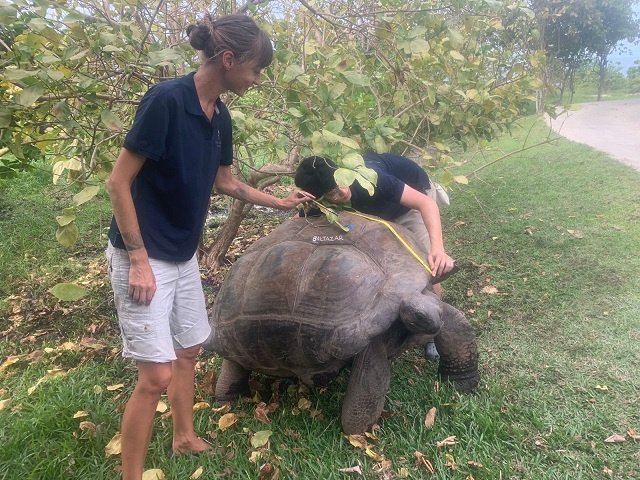 The tortoise is marked with a blue dot on its carapace and then measured and checked to see if it is a male or a female. (Fregate Island)

Conservation team members on Fregate, the easternmost granitic inner island of Seychelles, are conducting their yearly task to count the number of giant tortoises on the island.

Fregate is home to the second biggest giant tortoise population in the world - after the Aldabra atoll – a UNESCO World Heritage site where about 100,000 Aldabra giant tortoise species thrive. For this reason, the team sees that it is important to get as close as possible to understanding the actual number of the Fregate population. Following the census of 2021, the population was estimated to stand between 2,000 to 2,500 tortoises.

Anna Zora, the deputy conservation manager on the island, told SNA that it is important to keep track of the population, as well as to know the health of the tortoises.

"Anybody with a little bit of training can join the conservation team in the census, in fact, many staff members get involved in it. We also had guests involved. We give a little kit to the people interested and then they can collect the data for us," said Zora.

Once the tortoise census on Fregate kicks off, the whole conservation team and others involved, go around the island looking for tortoises. The team prepares a map of the island which is divided into nine zones to better understand the migration of tortoises and how they are spread out on the island.

Once one is spotted, the tortoise is marked with a blue dot on its carapace.

"We use paint that lasts for some time so that we have no problem with the mark being erased," said Zora.

The tortoises are then measured and checked to see if it is a male or a female. At the time of the interview, the number of male and female tortoises was the same.

When marking a tortoise, the team members also take into account the location in which the animal was found, marking it on the map. So far, the team has observed regular movements of tortoises around the island, with the fruiting seasons and rainy and dry weather being potential reasons behind the movements.

Zora outlined that the team does its best to ensure all tortoises on the island are counted and accounted for.

"There will be one stage in the census when we will encounter only marked tortoises during our visits. By the end of the census, we will be able to have a good enough idea on the numbers of tortoises we have on the island," she explained.

It usually takes the team four months to complete the census.