Biden to visit near Ukraine border in show of solidarity 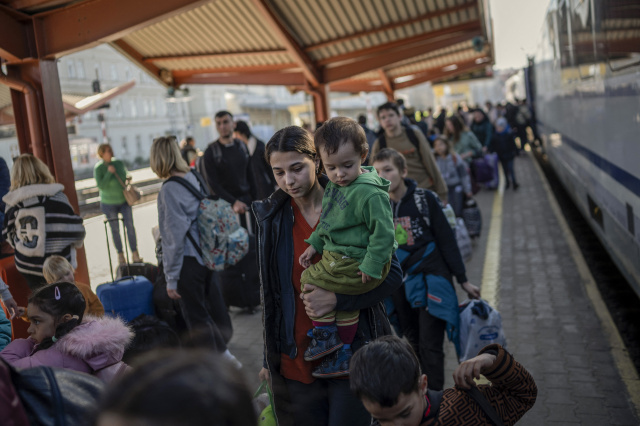 Ukrainian evacuees board a train to Warsaw at the rail station in Przemysl, near the Polish-Ukrainian border, on March 23, 2022, following Russia's military invasion launched on Ukraine. (Angelos Tzortzinis / AFP)

(AFP) - US President Joe Biden will travel to a town near the Polish-Ukrainian border Friday, trying to signal Western resolve against a Russian invasion that has increasingly turned to a grinding war of attrition.

Air Force One will jet into the eastern Polish town of Rzeszow -- bringing the US president less than 80 kilometres (50 miles) from a war-torn nation still struggling to repel a brutal Russian invasion.

The trip is designed to underscore Washington's willingness to defend NATO allies, as fears rise that the month-old war in Ukraine could spill westward sparking what the US president has called "World War III."

The Kremlin's refusal to rule out the use of nuclear weapons, and a steady flow of Russian disinformation about chemical and biological weapons in Ukraine has left Kyiv and its allies fearful of an even-more serious conflagration.

Russia is already accused of using phosphorus bombs and indiscriminate shelling of civilian areas -- something the United States has branded a war crime.

Against that backdrop, Biden will meet members of the US 82nd Airborne Division, part of NATO's increasingly muscular deployment to its eastern flank.

At an emergency summit in Brussels on Thursday NATO announced the deployment of further troops to Romania, Hungary, Slovakia and Bulgaria, as well as bolstering chemical and nuclear defences in case Russia expands its attack beyond Ukraine.

In Poland, Biden will also receive a briefing on the dire humanitarian situation in Ukraine, which has seen more than 3.5 million people pour out of the country, mostly to Poland.

The UN believes that more than half of Ukraine's children have already been driven from their homes, "a grim milestone that could have lasting consequences for generations to come," according to Unicef chief Catherine Russell.

"Every day it's 20, 30 times we go to the basement (to shelter)," said a sobbing 37-year-old Vasiliy Kravchuk in the garrison town of Zhytomyr.

"It's difficult because my wife is pregnant, I have a little son."

Biden's trip comes as the West faces urgent questions about what more it will do to help those like Kravchuk withstand the Russian onslaught.

About 100,000 civilians are said to be trapped in the southern port city with dwindling supplies of food, water and power, and with encircling Russian forces slowly grinding the city to dust.

Russia's highly censored media has broadcast aerial footage that appeared to be from Mariupol, showing a hellscape of charred and pocked apartment blocks spread across a singed and blackened wasteland.

That claim was not verified, and Ukraine's armed forces said Russia was still trying to sack Mariupol "without success."

The city is a treasured prize for Russia as it would enable a land bridge between Russian-annexed Crimea and regions already controlled by Russian proxy forces in eastern Ukraine.

While some civilians have been able to flee to Ukrainian-controlled territory, local officials said as many as 15,000 Mariupol residents have been forcibly deported to Russia.

In recent days Ukraine has also shown its ability to go on the counter-attack, seemingly pushing Russia's military out of towns near Kyiv and hitting valuable Russian targets in the south.

Ukraine on Friday claimed it had destroyed or damaged a small flotilla of Russian warships in the Ukrainian port city of Berdyansk.

According to the Ukrainian armed forces, Russian landing ship the "Saratov" was destroyed, and the landing ships "Caesar Kunikov" and "Novocherkassk" were damaged.

Images from the scene showed a large Russian warship ablaze at dockside, with other vessels steaming away from the inferno.

"Ukrainians will continue to target logistical assets in Russian-held areas," the UK Ministry of Defence said.

"This will force the Russian military to prioritise the defence of their supply chain and deprive them of much-needed resupply for forces."

But his plea for the floodgates to open and for the West to provide "all the weapons we need" has so far met a qualified response.

At an emergency summit in Brussels on Thursday, NATO leaders said they were willing to provide more of the Javelin and Stinger missiles that have repelled scores of Russian tanks and fighter jets.

Kyiv's allies are said to be discussing sending anti-ship missiles to Ukraine, although there were "some technical challenges," according to a senior US official.

But the United States has so far ruled out sending fighter jets or other large weapons systems.

Biden has repeatedly said he does not want to cross a line into what he says could pit nuclear-armed Russia against NATO.

For now, the West is content to squeeze Russia's economy and Putin's inner circle.

The European Union and the G7, also meeting in Brussels on Wednesday pledged to block transactions involving the Russian central bank's gold reserves, to hamper any Moscow bid to circumvent Western sanctions.

And a series of countries announced asset freezes and travel bans on more Kremlin-connected individuals.

There was no agreement to halt oil and gas imports from Russia, which fill Moscow's war chest to the tune of hundreds of millions of dollars per day.