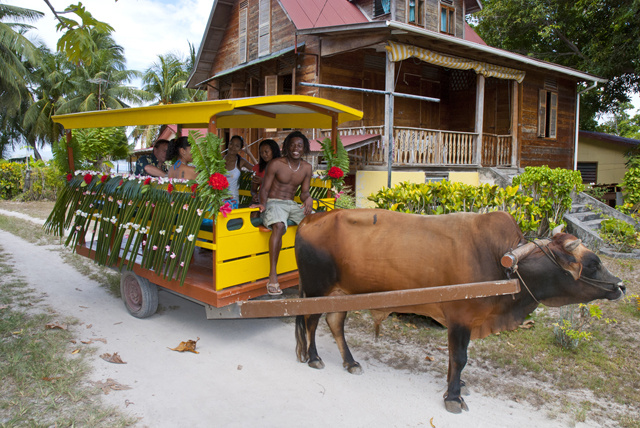 The ox cart - a two-wheel transport pulled by a cow – has traditionally been the mode of transport on La Digue for many visitors. (Gerard Larose)

Ox carts as a means of transportation on Seychelles' La Digue island are slowly dying out amid the introduction of more modern means of travel.

The ox cart - a two-wheel transport pulled by a cow – has traditionally been the mode of transport on La Digue for many visitors along with bicycles but its use is slowly declining with the introduction of electric buggies as well as few taxis.

Elias Radegonde, the last ox-cart owner on Seychelles' third most populated island, told SNA that "there used to be a time when owning an ox cart business allowed me to make a decent living."

It was mainly used by newlyweds on their wedding day and the ox carts were also available for hire for around $160 to $200 for full day trips.

Radegonde said that four years ago he had many clients whom he would not only take on tours of the island but also transport their luggage to their hotels but since the COVID pandemic started, his fleet has been reduced.

He added that his request to the local authorities to obtain additional ox carts has been denied.

He said that one of the issues he had been facing was the fact that some visitors were concerned by the way the animals were being treated.

Earlier this month, the Department of Transport announced a revision in the transport policy for La Digue, the third most populated island of Seychelles.

Patrick Andre, the principal secretary of transport explained that the new policy aim is to make the island more environmentally friendly.

While the new policy is aiming for more electric cars on the island, Andre said his department is encouraging the use of other environmentally friendly ventures such as ox carts.

He announced that there was no plan to stop issuing licenses for operators of ox carts although the authorities are discussing the importance of humane treatment of the oxen.

Meanwhile, Radegonde also told SNA that although he will still run his ox cart he owns because he believes that "this is a La Digue tradition that must be saved."

Seychelles' anti-corruption chief reappointed, says another case of missing $350m up for investigation