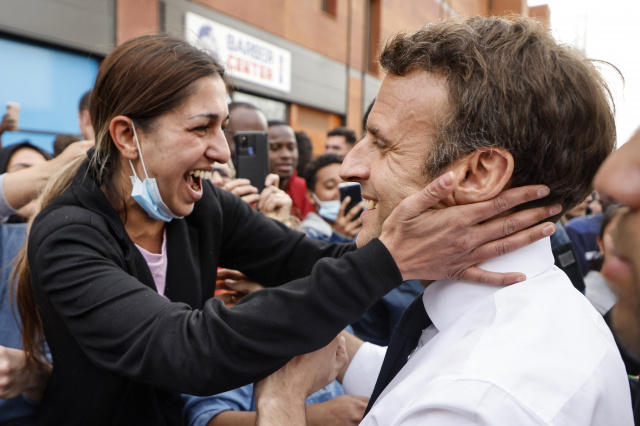 But not this year. Instead, it will cut off early to show a clownish cult comedy from 1993.

The decision to rebroadcast the surefire hit "The Visitors" saw TF1 accused of deepening a democratic deficit, but it also crystalized what polls have shown for weeks -- that the election has yet to capture the imagination of voters.

With less than two weeks to the April 10 vote, the 11 rivals hoping to knock the centrist Emmanuel Macron out of office have struggled to generate much momentum, let alone enthusiasm, against the background of the war in Ukraine.

Surveys show most people are convinced the 44-year-old former banker, whose reformist zeal upended politics-as-usual five years ago, will cruise through the first round toward a run-off victory on April 24.

According to a BVA poll released Friday, 75 percent of registered French intend to cast a ballot, which would be slightly down on the 2017 figure with absentee voters seen as helping Macron.

"People are increasingly utilitarian, they vote when it interests them, and we've seen that when it's a close race, more people vote," said Gerard Grunberg, a veteran political scientist at the CNRS research institute.

"That's going to help Macron because his base is fairly determined, especially in these times of war -- other voters might just say, 'We don't like Macron but he's going to win, and anyway we don't know who to vote for'," he told AFP.

While intentions to vote have climbed to around 30 percent for Macron since Russia's invasion of Ukraine, his opponents have remained behind in a series of polls.

"I hear those who say 'they're all the same, we're not going to vote' but think what you're doing for God's sake!" Melenchon told a rally in Marseille on Sunday.

A sputtering campaign by the conservative flag-bearer Valerie Pecresse, and the failure of the left to rally around a single candidate, has added to the widespread sense that the first-round outcome is pre-ordained.

The BVA poll found that 43 percent of registered voters were unable to cite a single proposal of any candidate.

However a despite the procession-like election campaign, analysts warn that the results of the first round remain tough to predict and the second round run-off a different game entirely.

Of those who say they will vote, four in 10 are still not sure for whom.

"It shows the degree of frustration among voters for a campaign that's been unlike any other -- It's like it never even really started," BVA's head of polling Adelaide Zulfikarpasic told AFP.

Uncertainty and low turnout could prove a volatile mix, she added, saying "the next two weeks are going to count double."

The latest poll by Ifop-Fiducial published Monday showed Le Pen slowly eating away at Macron's lead with the president at 28 percent in the first round and the far right leader on 21 percent.

Macron would win a run-off against Le Pen with 53 percent compared to her 47 percent, a tighter result than the same institute predicted a week ago.

Le Pen senior went on to lose in the run-off to Jacques Chirac, but the lesson to politicians of all stripes was clear: The fewer people vote, the bigger the risk.

An editorial in French daily Le Monde, citing an Ipsos-Sopra Steria poll it commissioned that predicted first-round turnout of just 67 percent, warned Monday against a "dangerous apathy" at a time of surging inflation, urgent climate change choices, and a war at the European Union's doorstep.

"When I see such feeble interest in this race, with one-fourth of the French who could still change their mind... things could change a lot" in the next two weeks, Frederic Dabi of the Ifop polling institute told Public Senat television on Monday.