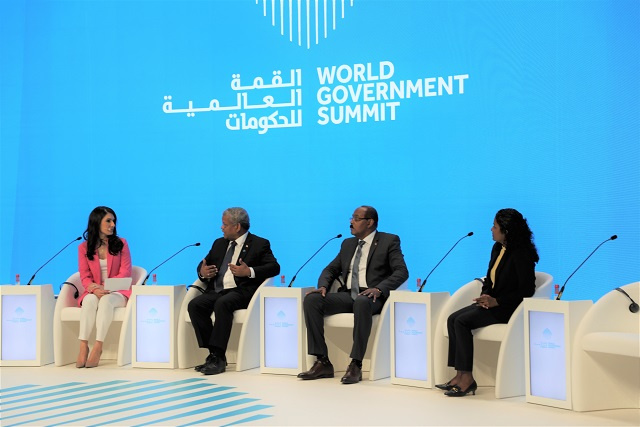 Ramkalawan (2nd left) was a speaker during the Global Energy Forum where he was a panellist in a discussion entitled 'The Rising Blue Waters... Governments Combating Climate Change' on Tuesday.

Many commitments have been made but the reality remains that more needs to be done to fulfil climate finance commitments, Seychelles President Wavel Ramkalawan said in a panel session at the World Government Summit in Dubai.

Ramkalawan was a speaker during the Global Energy Forum where he was a panellist in a discussion entitled 'The Rising Blue Waters... Governments Combating Climate Change' on Tuesday.

"We are still living in high hopes that the pledges will be accomplished. We had Paris, then Glasgow where the commitments keep being reinforced but unfortunately the results are not forthcoming," said Ramkalawan.

Representatives of Small Island Developing States (SIDS) on the panel included the Prime Minister of Antigua and Barbuda, Gaston Browne, and the Maldivian Minister for Environment, Climate Change and Technology, Aminath Shauna.

The discussion gave the leaders the opportunity to highlight the plight of small island nations vis-a-vis the negative effects of climate change and how continuous pollution and the inaction of large industrialised nations are threatening their existence.

The head of state of Seychelles, an archipelago in the western Indian Ocean, said that "small island nations are doing our utmost despite our size, limited landmass and resources; we continue to increase our percentage of protected zones. However, we are also the ones suffering the most in terms of the negative effects of pollution and climate change."

Seychelles has already designated, under law, 30 percent of its maritime territory as a protected area.

The island has also pledged to reduce greenhouse gas emissions by 24 percent by 2030 in its climate action plan submitted last year before the United Nations Climate Change Conference (COP26) in Glasgow. Adaptation to climate change is a high priority for Seychelles in order to reduce the country's vulnerability.

Following the session, Ramkalawan participated in a series of media interactions to further share the cause of small island nations as well as discuss relations between Seychelles and the UAE.

Prior to the World Government Summit, Ramkalawan visited a group of Seychellois officers undergoing training at the K9 Security Inspection Department of Civil and Defence Academy in Abu Dhabi.

During his visit, President Ramkalawan and his delegation viewed a full demonstration of some of the dog handling tactics the officers are learning and was briefed on the various types of operations they will be able to engage in upon completion of their course.

UAE to help Seychelles modernise and transform its public service