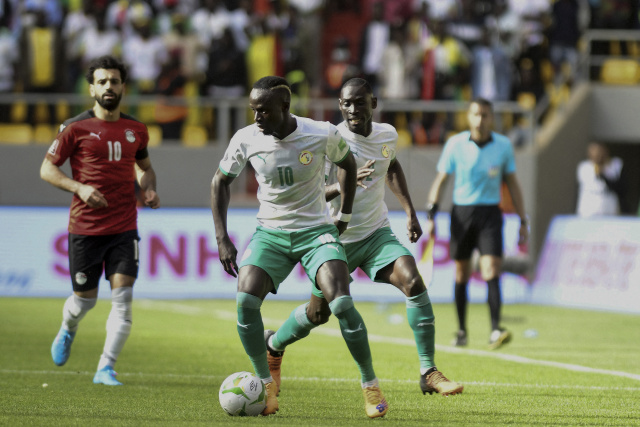 Senegal's Sadio Mane (C) controls the ball during the World Cup 2022 qualifying football match between Senegal and Egypt at the Me Abdoulaye Wade Stadium in Diamniadio on March 29, 2022. (SEYLLOU / AFP)

(AFP) - Liverpool star Sadio Mane converted a shoot-out penalty on Tuesday to take African champions Senegal to the 2022 World Cup in Qatar at the expense of Egypt.

Cameroon, Ghana, Morocco and Tunisia also booked their places in the finals on a frantic night of play-off action.

Senegal won the second leg of the African play-off 1-0 in Diamniadio thanks to a fourth-minute goal from Boulaye Dia and the teams finished level at 1-1 on aggregate after extra time.

As was the case in the Africa Cup of Nations final last month, Mane was entrusted with taking the crucial fifth Senegal kick and once again he made no mistake to give his side a 3-1 shoot-out victory.

Among the three Egyptians who failed to score in the shoot-out was Sane's Liverpool teammate Mohamed Salah, who uncharacteristically blazed his kick over the crossbar.

Only four of the nine penalty takers were successful with captain Kalidou Koulibaly and Saliou Ciss missing for Senegal and Salah, 'Zizo' and Mostafa Mohamed for Egypt.

As Senegal celebrated a second straight qualification for the World Cup, Egypt were left to lament another dramatic loss to Senegal this year.

There were no goals in the Cup of Nations final that went to extra time in Yaounde last month, leading to a shoot-out which Senegal won 4-2 with Mane converting the fifth penalty for his side.

"It was important to get off to a good start, something we had not done in Cairo," said Senegal coach Aliou Cisse.

"This team is better equipped (than the one which qualified for the 2018 finals). We (should have been) able to qualify in regular time given the chances we missed."

Egypt coach Carlos Queiroz said: "There is not much to say -- just nice words for the players for the game they played. Congratulations to Senegal."

The drama in Diamniadio came soon after Arsenal midfielder Thomas Partey scored the goal that took Ghana to the World Cup as they forced a 1-1 draw in Nigeria to win the play-off on away goals.

Partey struck after 10 minutes in Abuja and although another Premier League star, William Troost-Ekong, levelled from a 22nd-minute penalty, Nigeria failed to score again. The first leg ended goalless.

Public servants in the Nigerian capital were given a half-day and free transport was arranged from the suburbs to ensure a capacity 60,000 crowd cheered on the Super Eagles.

But the home team fell behind early on when Partey's shot from outside the box slipped between the hands of goalkeeper Francis Uzoho and into the net.

Troost-Ekong was the calmest person in the cauldron of noise midway through the opening half as he sent Ghana goalkeeper Jojo Wollacott the wrong way from the penalty spot to equalise.

Napoli forward Victor Osimhen had the ball in the net for Nigeria soon after, but it was ruled offside after a VAR check.

Nigeria applied constant second-half pressure, but could not break down a Ghana defence marshalled by Leicester City centre-back Daniel Amartey.

Ghana started the two-leg tie as underdogs after a dismal showing at the Cup of Nations in January, with a loss to minnows the Comoros condemning them to a humiliating first-round exit.

Karl Toko Ekambi scored in the fourth minute of added time at the end of extra time to gave Cameroon a dramatic 2-1 win over Algeria in Blida and qualification on away goals.

Eric Maxim Choupo-Moting put eight-time qualifiers Cameroon ahead in the 22nd minute and they retained the lead until the 118th minute when Ahmed Touba equalised in the second leg of a play-off.

But with Algeria leading 2-1 overall having won the first leg 1-0 last Friday, and seemingly set for Qatar, Toko Ekambi struck.

Azzedine Ounahi scored twice as Morocco trounced the Democratic Republic of Congo 4-1 in Casablanca to reach the finals for a sixth time.

Tarik Tissoudali and Paris Saint-Germain full-back Achraf Hakimi also netted for the Atlas Lions, who qualified 5-2 on aggregate after the first leg finished 1-1 in Kinshasa.

Tunisia secured their place in Qatar despite being held 0-0 at home by Mali in the second leg of a play-off.

A pre-match warning by Tunisia coach Jalel Kadri to his team that the return match would be even tougher than the first leg in Bamako last Friday proved spot on.

Having built a 1-0 lead in Mali through a Moussa Sissako own-goal, Tunisia were unable to build on their aggregate advantage and only scraped through.