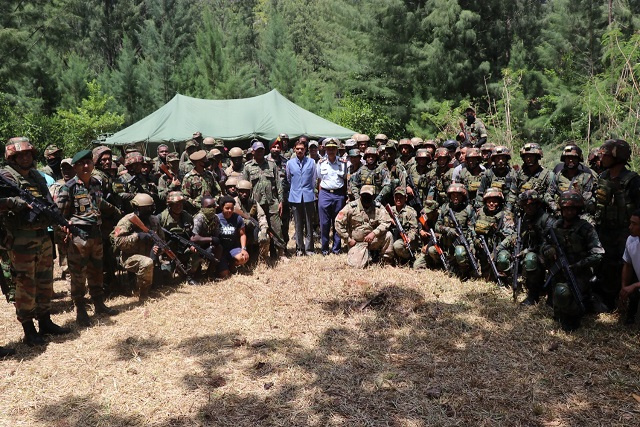 The 'Exercise Lamitye,' which translates from Creole to 'Friendship Exercise,' took place in Seychelles from March 22 to 31. (Seychelles Defence Forces)

Military personnel from Seychelles and India have learned how to work together to carry out counterinsurgency, counter-terrorism and anti-piracy operations in a 10-day joint exercise.

The 'Exercise Lamitye,' which translates from Creole to 'Friendship Exercise,' took place in Seychelles from March 22 to 31 with the participation of the main units of the Seychelles Defence Forces (SDF), which includes the Coast Guard, Air Force and Special Forces.

The chief of the Seychelles Defence Forces (SDF), Brigadier Michael Rosette, said that all the main units were represented in the exercise "to ensure that we train how to operate jointly as a coordinated cohesive body that is efficient and adapted to work alongside other forces."

"For all our SDF officers and service personnel, I am sure that through your active participation, you made the most out of the training and the experience of your counterparts, and shared your knowledge for the benefit of both forces, as this is the spirit of the exercise," Rosette told the participants.

The SDF chief expressed his gratitude for the effort made by their Indian counterparts to make this exercise possible even in these uncertain times when the world continues to battle the COVID-19 pandemic.

The Indian High Commissioner, General Dabir Suhag - a former Chief of Army Staff of the Indian Army - thanked everyone involved for continuing to make this exercise a success, despite the challenges.

"While the Indian army has experience in fighting various wars across their history, with such exercises, both countries can learn from each other and share ideas that will benefit each nation," he said.

According to the defence officials, since the programme's inauguration in 2001, the exercise has continually progressed with scenarios and operations being tailored based on the needs, current situations and threats that each country may have to deal with.

"The theme for this year's exercise and setting is aimed at addressing evolving scenarios of today's fluid world, characterised by acts of violence and destabilization perpetrated by non-state actors," said Rosette.

Seychelles, an archipelago in the western Indian Ocean, has a longstanding cooperation with India in defence and security. This includes maritime security, anti-piracy operations, air surveillance, training and capacity building. India is one of Seychelles' oldest and closest military partners, having provided patrol ships, aircraft and helicopters to its defence forces over the years since the country gained independence from Britain in 1976.

Rosette said that the partnership between the two countries' military is strong and he hopes to continue seeing Seychellois heading to India's various defence institutes for training in the future.

'Exercise Lamitye 2022' is expected to pave the way for both sides to grow further together through professional and cultural learning as well as social interactions.