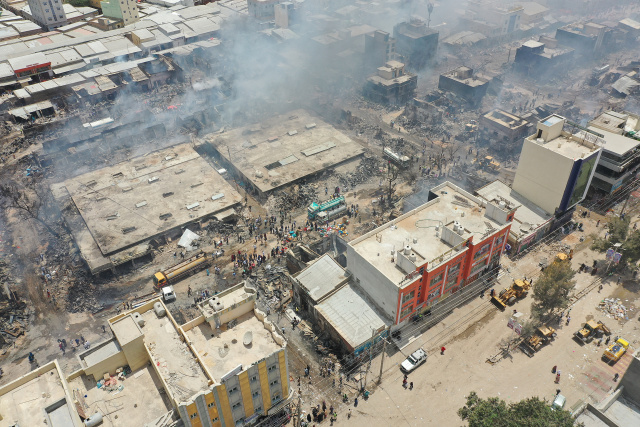 This earial view shows the aftermath of the fire that broke out at at Waaheen market in Hargeisa, Somaliland, on April 2, 2022. A massive fire tore through the main market in the city of Hargeisa in northern Somalia overnight, injuring about two dozen people and destroying hundreds of businesses, officials said on April 2, 2022. (MATAAN YUUSUF / AFP)

(AFP) - Stunned residents of the northern Somali city of Hargeisa were struggling to pick up the pieces Sunday after a massive inferno destroyed the central market, and with it the livelihoods of thousands.

The mayor of Hargeisa, capital of the breakaway region of Somaliland, estimated the blaze that engulfed the Waheen market had caused losses of up to $2 billion.

Officials have issued urgent appeals for help to rebuild the open-air market, which was the bustling economic heart of Hargeisa with an estimated 2,000 shops and stalls.

The fire broke out late Friday and the flames rapidly swept through the market, consuming everything in their path before they were largely brought under control on Saturday.

No-one was killed in the disaster that struck at the start of the holy Muslim month of Ramadan, but 28 people were injured and hundreds of businesses destroyed, officials said. The cause is not yet known.

"According to preliminary information about the damage the fire caused, there is an estimated loss of property ranging between $1.5 billion to $2 billion," Hargeisa mayor Abdikarim Mohamed Moge told reporters late Saturday.

"The town has never witnessed such a massive calamity."

He said the clean-up operation would begin in earnest on Tuesday after allowing local residents and traders to try to retrieve any property that survived the blaze.

A five-member committee has been set up by Somaliland's president Muse Bihi Abdi to lead the rescue operation and efforts to assist those whose livelihoods have been ruined by the disaster.

Images from the scene showed huge flames and clouds of smoke billowing into the sky over Hargeisa as the fire took hold, with many buildings destroyed or turned into charred wrecks, their windows blown out.

Somaliland's fire and rescue chief Ahmed Mohamed Hassan said at least 24 vehicles were used in the firefighting operation but were hampered by poor access in the sprawling market and the difficulty of breaking into shops locked up with iron bars.

"We have been complaining about the overcrowding here for some time and sent our concerns to the business owners, but they have ignored our calls to clear the clogged pathways," he said.

"I hope they will learn from this."

Several countries including Britain, which once ruled Somaliland as a protectorate, and neighbouring Ethiopia and Djibouti have offered support and sympathy over the disaster.

"Your city will rise again and the UK will do what we can to support Somaliland’s rebuilding effort," British Prime Minister Boris Johnson tweeted on Saturday, without giving details.

Somaliland declared independence from Somalia in 1991, an act not recognised by the international community that has left the region of 4.5 million people poor and isolated.

Somaliland has however remained a comparative beacon of stability while Somalia has been wracked by decades of political violence.

Africa » Be a reporter: Write and send your article » Subscribe for news alert
Tags: Somalia, fire