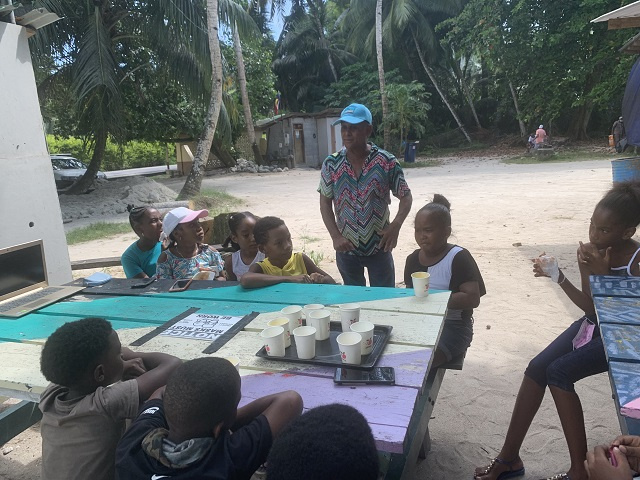 Forty people took part in the event including students from Anse Boileau school with their eco leader. (Sey No Plastic)

(Seychelles News Agency) - Sey No Plastic, a non-profit organisation in Seychelles, is educating local communities on the dangers of plastic in the environment and the importance of recycling in a series of roadshows.

The roadshows are part of a project called "Transition to Circularity in Plastic Waste Management and Reuse of the Blue Economy".

The first roadshow was held with the fishermen and school children at Anse Aux Poule Bleue in the districts of Baie Lazare and Anse Boileau recently. It was co-organised by Fady Francourt Ark Consulting and the Baie Lazare Fishermen's Association.

Katrin Perchat, the head of Sey No Plastic, told SNA that the aim of the project is "to change people's habits, which is not done by simply asking them. You need to educate about threats, especially those to your own livelihoods in order to change their behaviours."

The NGO's project is part of a series of efforts being undertaken in Seychelles to educate people on the dangers of marine plastic waste and its effective management.

"The idea was to immerse the country with the right message at all levels," said Perchat.

Forty people took part in the event including students from Anse Boileau school with their eco leader.

"The children learned how plastic waste harms and stresses ocean ecosystems when thrown into nature. There were also showings of videos about marine plastics leading to questions and discussion sparking the children's curiosity about the subject," added Perchat.

In the roadshow, the fishermen revealed how they are experiencing the threat to marine life first hand and when they return from fishing, they bring fish as well as plastics they find.

Before leaving, participants learned how to reduce their plastic footprint by using reusable bottles and food containers and also thinking about how to reuse or recycle plastics.

The project is part of a French development assistant programme given to Seychelles through a grant of SCR1.7 million ($120,000) to develop three projects within the Blue Economy.

"We want Seychellois to understand what is at stake when they leave plastic waste on beaches or elsewhere in nature," explained Perchat.

The recent United Nations Environmental Programme (UNEP) consultative meeting on marine plastic for a national action plan, held at the Savoy Resort and Spa, is among many discussions Seychelles is taking part in, to combat plastic waste.

Scientific research shows that the Earth gets half of its oxygen from the ocean, which makes up 70 percent of the world's surface and 80 percent of the planet's biodiversity.

Sey No Plastic will hold more roadshows in other communities in Seychelles.