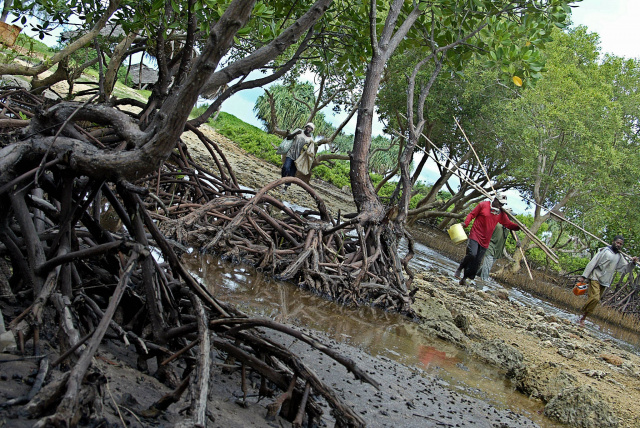 A photo taken 19 May 2007 shows fishermen returning from a fishing expedition near a mangrove at Gazi near in the Kenyan coastal town of Mombasa. Mangrove are an important breeding ground and habitat for fish, crustaceans and birds and vital in warding off coastal erosion even though in Kenya and the rest of Africa efforts to conserve and restore mangrove are minimal, which has seen some of Kenya's 54,000 hectares (133,380 acres) depleted with impunity mostly through industrial development and pollution which has caused havoc on important ecosystems and eradicated a buffer against typhoons and hurricanes. (AFP PHOTO/TONY KARUMBA)

(AFP) - Along a riverbank scarred by logging, Joseph Mwandenge Mangi points out a solitary mangrove tree, a species once abundant in the forest where the mighty Sabaki River meets the sea.

"This is the last one. There are no more left," said the 42-year-old Kenyan, who grew up on the estuary and possesses a seemingly encyclopedic knowledge of its flora and fauna.

The surviving tree is a sombre reminder for local communities working to restore this critical ecosystem to health, and make amends for the plunder of the past.

For generations villagers living near the Sabaki estuary had relied on its natural bounty for lumber and firewood, fresh water, seafood, farming land, and plants for traditional medicine.

Sustainably nurtured, the coastal wetland is also a resilient ally in the face of a changing climate -- storing carbon, filtering water pollution, and protecting against extreme weather and rising sea levels.

But years of unchecked exploitation inflicted terrible damage on the mangroves, mudflats, freshwater pools and sandy dunes at the mouth of Kenya's second-longest river.

Mangrove wood -- harvested sustainably for centuries to build traditional Swahili homes -- was chopped down to feed construction in fast-growing coastal towns like nearby Malindi, a popular tourism hub.

Locals overfished the river, using mosquito nets that trapped even the smallest of sea life.

Fertile soils were uprooted and washed downstream into the Indian Ocean, further reducing fish in the Sabaki and killing coral reefs offshore.

"The landscape has changed. Back in the day, we used to have a huge forest with elephants and monkeys," said Francis Nyale, a 68-year-old village elder, standing among a clearing of gnarled mangrove stumps.

But one tree at a time, local villagers are bringing the estuary back to life.

Further down the Sabaki, where its brown waters meet the blue ocean, and swarms of migratory birds flock overhead, a team of volunteers plant mangrove saplings along the riverbank.

There are early signs that their efforts are paying off.

Crouched in a grove of older trees, Kagema spotted clusters of tiny green shoots bursting out of the dark soil -- evidence of natural regeneration, an ecosystem on the mend.

"The world is changing, a lot. But for the mangroves, their ability to bounce back... and colonise the areas they used to be in the past, is quite encouraging," he said.

These remarkable trees also deliver for the planet many times over -- mangroves can absorb five times more carbon than forests on land, and act as a barrier against storm surges and coastal erosion.

Protecting mangroves is 1,000 times cheaper per kilometre than building seawalls against ocean rises, according to the UN Environment Programme (UNEP), which sponsors the Sabaki restoration project.

For local communities, there are economic benefits in rehabilitating nature.

UNEP estimates that a single hectare of mangrove forest can deliver anywhere between $33,000 and $57,000 per year economically.

In Sabaki, local guides are supplementing their income by leading visitors and school groups to see the hippos and birdlife that call the estuary home.

Work is under way to improve tourist facilities, expand traditional beekeeping in the forest, and open a nursery for plant saplings.

Convincing the Sabaki's four villages that there is value in conservation requires careful diplomacy and a local touch, said Mangi, who leads a community group restoring the estuary.

They are working with fishermen to abandon unsustainable practices, and volunteer rangers who catch loggers in the estuary handle offences in-house to keep everyone on side.

"We don't take them to the police. We talk to them. We want them to understand that please, there is something good in these trees (rather) than cutting," said Mangi.

Jared Bosire, from the Nairobi Convention, a regional environmental partnership for the Western Indian Ocean, said the Sabaki community was demonstrating how local approaches to conservation could prove mutually advantageous.

"The hope is there will be lessons learned that could be replicated in other areas," said Bosire, the Convention's project manager.

More than 80 percent of mangroves have already been lost along western parts of the Indian Ocean.

For Mangi, there would be no community without them: "If we don't have these trees, we lose our heritage."