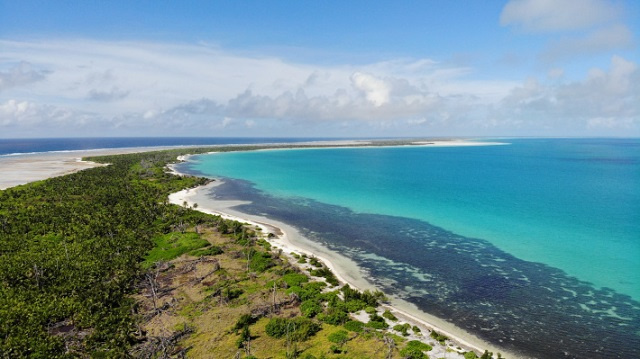 (Seychelles News Agency) - Understanding how much blue carbon there is in Seychelles will help put the island nation on the global map and facilitate access to funding, a local expert said on Monday at a citizens' workshop.

The workshop is part of a project - the Roadmap to Blue Carbon opportunities in Seychelles - being carried out by the James Michel Foundation (JMF) in partnership with Deakin University in Australia and Seychelles' climate change ministry. The project is being financed through a grant by the Seychelles Conservation and Climate Adaptation Trust (SeyCCAT).

Ameer Ebrahim, the project's coordinator and leading local expert, told the press that "once we understand how much blue carbon there is in Seychelles, this can be brought up at an international level such as at the Paris Agreement negotiations and climate mitigation negotiations to show the world: this how much carbon dioxide that Seychelles is storing."

Ebrahim said that "if we are looking for international funding to help preserve these environments and help put Seychelles on a global map, these kinds of data and projects will help with that process."

As the project is entering its final stages, the team organised a citizen science workshop on Monday, to give an introduction to blue carbon ecosystems and demonstrate monitoring techniques focusing on mangrove forests.

"A series of talks were given by the blue carbon team in Australia, and later in the afternoon, attendees headed into the mangrove forest of Port Launay where they were shown how blue carbon data is collected and how that could influence the net national determined contribution of the country," said Ebrahim.

"This is so important because science is now showing that seagrass meadows and mangrove habitats absorb 40 to 50 times more carbon than tropical rainforests," said Ebrahim.

The wetland of Port Launay is a natural homeland to all of the seven species of mangroves that grow in Seychelles. Having been declared a Ramsar Site in 2004 means the wetland is protected and is of international importance. Ramsar is an international convention that preserves wetlands.

In his virtual remark at the workshop, the former Seychelles president and JMF founder, James Michel said that dedicating 30 percent of marine space as protected areas is a testimony of the importance that Seychelles places on biodiversity protection.

"Seychelles has further committed to protecting at least 50 percent of its seagrass and mangrove ecosystems by 2025 and 100 percent by 2030. This is remarkable progress in the fight against climate change and it underlines the importance of these ecosystems as nature-based solutions," said Michel.

Kicking off in May 2019, the project started with a literature review, which looked at any sort of blue carbon research that is being done in Seychelles.

"Shockingly we found very few research papers that were available, so we had to move it to the general region of the Western Indian Ocean. That was published in May 2021," said Ebrahim.

The second component of the project involved a stakeholder interview process, capturing the public's understanding of what blue carbon really is.

Thirdly, through the field workshop held on Monday, the different techniques used to collect blue carbon were looked at. The final component is the development of a roadmap document which will be submitted to the government of Seychelles at the end of the project.