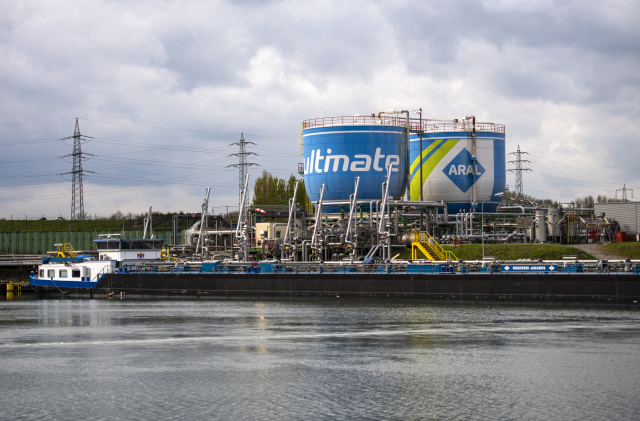 A view shows a fuel depot of Aral at the Ruhr Oel petroleum refineries of BP Gelsenkirchen GmbH in Gelsenkirchen, western Germany on March 8, 2022. After the EU states decided on an import ban of Russian coal, an import ban of oil from Russia to the European Union could follow. (Ina FASSBENDER / AFP)

(AFP) - In Denmark, large black pipes are about to be buried in a muddy trench, as construction of a gas pipeline from Norway to Poland resumes following Russia's invasion of Ukraine.

From plans for liquefied natural gas terminals in northern Germany, Finland and France to potential new routes through Spain and the Mediterranean, Europe is striving to rid itself of its dependence on Russian gas, though experts say the task will take years to complete.

"Of course it's also to have the gas in the Danish system but mainly also to help our good neighbours' gas systems and our Polish good friends," Soren Juul Larsen, head of the project at Danish energy infrastructure operator Energinet, told AFP in English.

Just a week after the invasion of Ukraine, the Danish environmental authority -- which had concerns about the project's impact on local populations of mice and bats -- granted a permit to continue construction, after a nine-month suspension.

"The pipeline was stopped because of a lack of permissions concerning the protection of nature and rare species," Trine Villumsen Berling, a researcher at the Danish Institute for International Studies, told AFP.

"We were expecting it to soon be approved but of course the war made it a more pressing issue," Villumsen said.

Envisioned almost 20 years ago, construction of the partly submerged pipeline began in 2018. It is now expected to start operations in October, before becoming fully operational on January 1, 2023.

"We really have a good cooperation with all contractors to speed up (and) do whatever we can to protect the schedule," Juul Larsen explained during a visit to the construction site.

With an annual transport capacity of 10 billion cubic metres of gas, the pipeline should cover around 50 percent of consumption by Poland, which announced three years ago it would end its contract with Russian giant Gazprom in 2022.

While this may be good news for Poland, it could spell trouble for other European countries seeking to free themselves of Russian gas.

Norway, Europe's second-largest gas supplier after Russia, is delivering at full capacity, so more gas to Poland means less for the rest of the continent.

"This project would help out Poland but may lead to less Norwegian gas exports to the UK and Germany," Zongqiang Luo, an expert at research firm Rystad Energy, told AFP.

In addition, many long-term contracts between Russia and European suppliers are valid for another 10 to 15 years, he noted.

While the European Union has resisted calls to ban Russian gas immediately, it has announced plans to slash imports by two thirds this year and eliminate them entirely before the end of the decade.

With Norway at full capacity, Dutch and UK fields in decline, and Russian gas declared undesirable, Europe is looking for gas from further away, including liquefied natural gas (LNG) transported by ship from the US, Qatar and Africa.

But such imports require the construction of large LNG terminals to turn it back into gas or, at the very least, the purchase of so-called floating storage regasification units (FSRUs).

As the entry into service of the Nord Stream 2 gas pipeline from Russia has been suspended, Germany has urgently relaunched three LNG terminal projects previously considered to be of low priority.

Finland and Estonia last week announced a project to lease an import terminal ship. Estonia and the other two Baltic countries say they have stopped importing Russian gas since April 1.

In southern Europe, Spain and Portugal are strengthening an alternative supply route to help Europe wean itself off Russian gas.

To this end, the port of Sines, Portugal's largest, plans to double the capacity of its gas terminal in under two years.

Spain, which is linked to Algeria via a pipeline and has vast LNG terminals, could provide another supply option for Europe but this would require major work to improve connections with the rest of the EU, notably via France.

Another option under consideration is to connect Europe to the gas from the eastern Mediterranean, where large reserves have been discovered off Israel and Cyprus over the past 20 years.