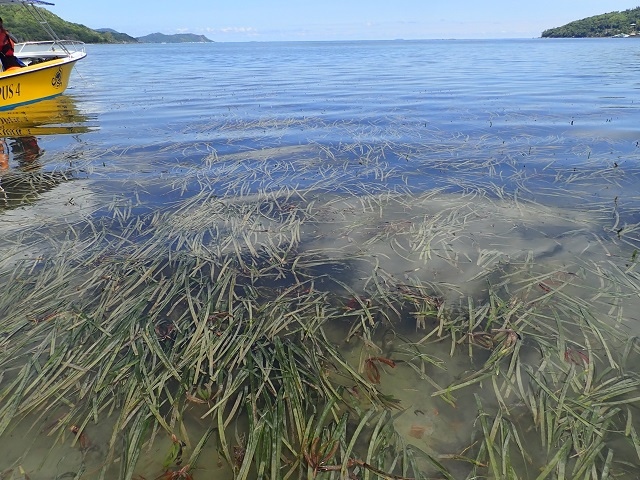 (Seychelles News Agency) - A podcast by two Seychellois students passionate about climate change and the sustainability of Seychelles started on Monday.

The podcast called 'Together Far Apart podcast of UN Moves', which focuses on small island states, was made by Stacy Coopoosamy and Zoe. The first episode was "Let's hear it for seagrass."

The content for the podcast was done by Sey Creative, a content agency in Seychelles, that worked with the United Nations to provide the information for the island nation's part in the podcast.

"We were approached by the UN they were making a series of podcasts on small island nations looking for different things from different islands that were not the usual conservation stories," said the head of the agency, Fiona Winterburn.

Winterburn decided to try using the two girls who were on attachment at her company and found that they were brilliant.

"It's really natural, heartfelt – they went through the script and enjoyed it," she said.

The two students interviewed a policymaker, a marine biologist, and the leader of an environmental conservation organisation.

One of the students, Stacy Coopoosamy told SNA that it was a "fun experience as I had never done a podcast before. To be honest, we never knew about seagrass before and I was going through the script every day, so it was a very educational experience.

As she was already working on the seagrass project with the Seychelles Conservation and Climate Adaptation Trust (SeyCCAT), she pitched the story to the United Nations.

Work on Seychelles' contribution to the podcast started in January.

Winterburn said the explanation of what seagrass is to people and eventually talks about the future is the extra contribution they made to the seagrass education and awareness campaign SeyCCAT is holding.

"It is the importance of educating children as to what seagrass is and the future of seagrass,' she said of the podcast.

Meanwhile, seagrass in Seychelles has officially recognised Creole names which is the result of a campaign done by SeyCCAT and Lakademi Kreol Sesel (Seychelles Creole Academy).

The campaign was launched on March 1 last year to commemorate the start of Seagrass Awareness Month.

The aim of the exercise was to get people involved in finding official Creole names for seagrass and its five lifeforms found in Seychelles' waters. Fishermen, linguists and members of the public were among those involved in the exercise.

People in Seychelles - an archipelago on the Indian Ocean – did not have a specific name for seagrass until the project was launched. Most people just called the species 'gomon', which included all types of marine plants. Now there are two Creole name options for seagrass -- zerb lanmer or 'gomon zerb

Other new words added to the Seychellois Creole language to properly distinguish seagrass are Gomon gran fey/ Gomon zerb gran fey for Enhalus, while Gomon torti are the names given to Thalassia, Cymodocea and Halodule.