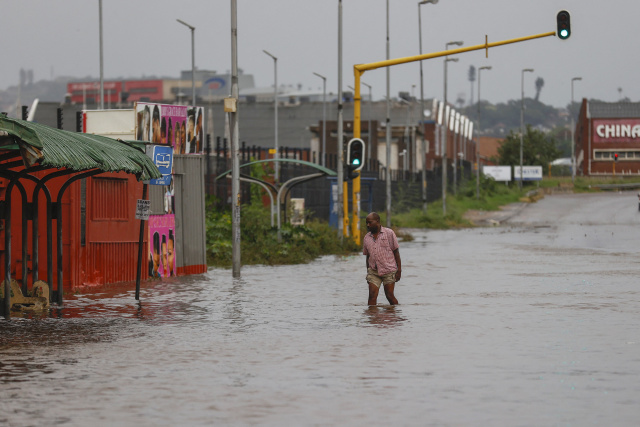 A man walks towards food stalls following heavy rains and winds in Durban, on April 12, 2022. At least five people have been killed in floods and mudslides across South Africa's port city of Durban following heavy rains in recent days.Days of rains have flooded several areas and shut dozens of roads across the city. (Phill Magakoe / AFP)

The heaviest rains in 60 years pummelled Durban's municipality, known as eThekwini. According to an AFP tally, the storm is the deadliest on record in South Africa.

"The biggest worry is the number of bodies we are finding," she said. "Our mortuaries are under a bit of pressure, however we are coping."

The United Methodist Church in the township of Clermont was reduced to a pile of rubble. Four children from a local family died when a wall collapsed on them.

Other homes hung precariously to the hillside, miraculously still intact after much of the ground underneath them washed away in mudslides.

Shipping containers were tossed about, washed into mountains of metal.

Sections of other roads were washed away, leaving behind gashes in the earth bigger than large trucks.

"We see such tragedies hitting other countries like Mozambique, Zimbabwe, but now we are the affected ones," President Cyril Ramaphosa said as he met with grieving families near the ruins of the church.

South Africa's neighbours suffer such natural disasters from tropical storms almost every year, but Africa's most industrialised country is largely shielded from the storms that form over the Indian Ocean.

These rains were not tropical, but rather caused by a weather system called a cut-off low that had brought rain and cold weather to much of the country.

When storms reached the warmer and more humid climate in Durban's KwaZulu-Natal (KZN) province, even more rain poured down.

"Some parts on KZN have received more than 450 millimetres (18 inches) in the last 48 hours," said Tawana Dipuo, a forecaster at the national weather service -- nearly half of Durban's annual rainfall of 1,009 mm.

Rain continued in parts of the city on Wednesday afternoon, and a flood warning was issued for the neighbouring province of Eastern Cape.

The storm struck as Durban had barely recovered from deadly riots last July which claimed more than 350 lives, in South Africa's worst unrest since the end of apartheid.

Schools not affected by the floods re-opened Wednesday but few students turned up. A teacher at a primary in Durban's Inanda suburb said only two of 48 pupils reported for classes.

The national police force deployed 300 extra officers to the region, as the air force sent planes to help with the rescue operations.

Days of driving rain flooded several areas,smashed houses and ravaged infrastructure across the city, while landslides forced train services to be suspended across the province.

The rains flooded highways to such depths that only the tops of traffic lights poked out, resembling submarine periscopes.

Torrents tore several bridges apart, submerged cars and collapsed houses. A fuel tanker floated at sea after being swept off the road.

After TV footage showed people stealing from shipping containers, the provincial government condemned "reports of the looting of containers" during the flooding.

Southern parts of the country are bearing the brunt of climate change -- suffering recurrent and worsening torrential rains and flooding.

"We know it's climate change getting worse, it's moved from 2017 with extreme storms to supposedly having record floods in 2019, and now 2022 clearly exceeding that," University of Johannesburg development studies professor Mary Galvin said.