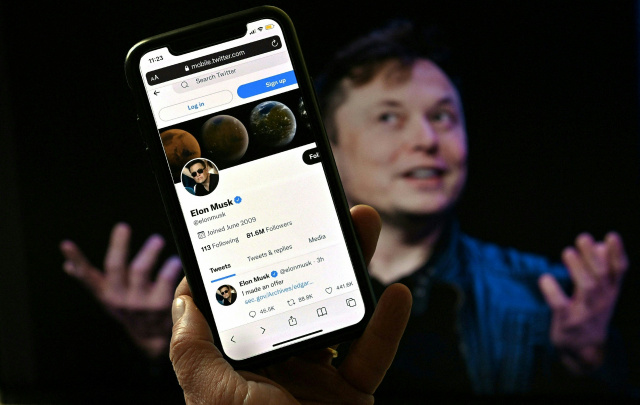 (AFP) - Tesla chief Elon Musk launched a hostile takeover effort for Twitter on Thursday, insisting the platform needs to be transformed but acknowledging his $43-billion bid may fail.

The proposal faces uncertainty on multiple fronts, including possible rejection and the challenge of assembling the cash, but could have wide-reaching impacts on the social media service if consummated.

Musk cited the promotion of freedom of speech on Twitter as a key reason for what he called his "best and final offer," and which the firm's board said it was reviewing.

"My strong intuitive sense is that having a public platform that is maximally trusted and broadly inclusive is extremely important to the future of civilization," he said in his first spoken comments after the offer was revealed in a regulatory filing.

The world's richest person offered $54.20 a share, which values the social media firm at some $43 billion, in a filing with the Securities and Exchange Commission made public on Thursday.

Musk told a conference in Canada that he was "not sure" he would succeed and acknowledged a "plan B" but refused to elaborate, though in the filing he noted a rejection would make him consider selling his shares.

Musk last week disclosed a purchase of 73.5 million shares -- or 9.2 percent -- of Twitter's common stock, an announcement that sent its shares soaring more than 25 percent.

Twitter's board said it would carefully review what it termed Musk's "unsolicited, non-binding" offer and decide on a course of action that was "in the best interest of the company and all Twitter stockholders."

Musk said he "could technically afford" the buyout while offering no information on financing, though he would likely need to borrow money or part with some of his mountain of Tesla or SpaceX shares.

Despite saying he wanted to take the company private, he said the firm would keep up to 2,000 investors -- the maximum allowed.

Some investors have already spoken against the proposal, including businessman and Saudi Prince Alwaleed bin Talal.

"I don't believe that the proposed offer by @elonmusk ($54.20) comes close to the intrinsic value of @Twitter given its growth prospects," he tweeted.

Morningstar Research analysts echoed that perspective, saying, "While the board will take the Tesla CEO's offer into consideration, we believe the probability of Twitter accepting it is likely below 50 percent."

Twitter stock closed down nearly two percent for the day.

Musk's move throws another curve into the roller-coaster ride of his volatile relationship with the global social media service, and raises many questions about what comes next.

He was offered a seat on the board but turned it down over the weekend.

Musk went on to use Twitter as a stage to ask whether the social media network was "dying" and to call out users such as singer Justin Bieber, who are highly followed but rarely post.

"Most of these 'top' accounts tweet rarely and post very little content," the Tesla boss wrote, captioning a list of the 10 profiles with the most followers -- which includes himself at number eight, with over 81 million followers.

In other weekend tweets, Musk joked about dropping the "w" from Twitter's name and about converting its San Francisco headquarters to a homeless shelter "since no one shows up anyway."

"He is such an entitled, privileged man, I am not sure the Twitter he has in mind is a platform that will ultimately serve a majority of the people on it today," said Creative Strategies analyst Carolina Milanesi.

Musk has mused on Twitter about giving verified account check marks to everyone paying for premium subscription accounts, which cost $3 monthly.

"I invested in Twitter as I believe in its potential to be the platform for free speech around the globe, and I believe free speech is a societal imperative for a functioning democracy," Musk said in his filing.

Musk breaks the mold as a business figure, even in the Silicon Valley world known for disrupting markets and changing lifestyles.

The serial entrepreneur's endeavors include driving a shift to electric vehicles with Tesla, private space exploration and linking computers with brains.

His behavior, however, has raised eyebrows, prompted laughs and sometimes drawn condemnation or even litigation.

"It's get out the popcorn time as we expect many twists and turns in the weeks ahead as Twitter and Musk walk down this marriage path," Wedbush analysts said in a note to investors.