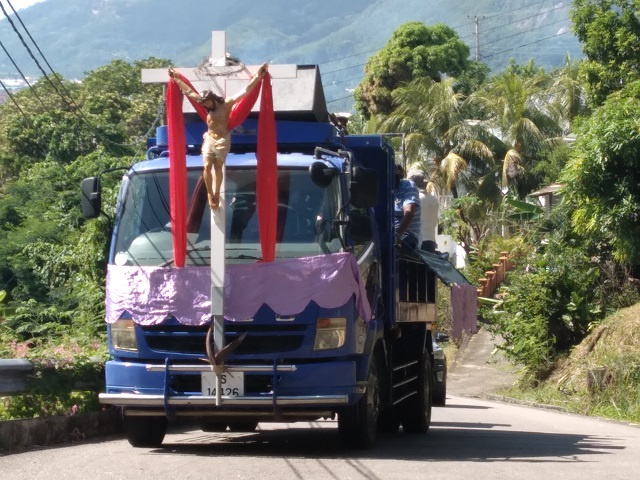 A pick-up truck decorated with a crucifix, carrying members of the Diocese led the motorcade. (Rita Joubert-Lawen)

With current COVID-19 restrictions in place on large gatherings, Seychelles' Roman Catholic church members held a motorcade for the Way of the Cross in the capital of Victoria instead of a walking procession to mark Good Friday.

Traditionally, the Way of the Cross is held in various parishes in the Seychelles to mark Good Friday – a day of mourning for Christian believers.

The event commemorates the procession of Jesus Christ with his cross in Jerusalem, which ended in his crucifixion at Golgotha.

Since the onset of the pandemic, churches in Seychelles, an archipelago in the western Indian Ocean, have not been excluded from restrictions put in place to contain the spread of the virus.

"We have not yet received permissions to walk and hold processions, although we may meet in church. As a result, this year we held the Way of the Cross as a motorcade to limit large crowds," Father David Alcindor from the Diocese of Port Victoria, told the SNA.

A pick-up truck decorated with a crucifix, carrying members of the Diocese led the motorcade with around 75 cars. The motorcade went through the districts which fall under the Victoria parish and these included English River, Mont Buxton, St Louis and Bel Air and ended at the Cathedral of the Immaculate Conception in the capital.

Alcindor said although they had not planned on having a large motorcade, he was satisfied with the turn-out.

Godfrey Bonnelame told SNA that the motorcade "is a very good initiative now that we cannot walk in a procession as we did traditionally.  We did most of the stations in the four districts and the last one in the Cathedral singing and praying. It was different but very good."

Alcindor said that if the restrictions remain as they are "the option to hold a motorcade is always available to the church."

Seychelles is a predominantly Christian country with the majority of believers being Roman Catholic, followed by the Anglican Church and many other Christian denominations.