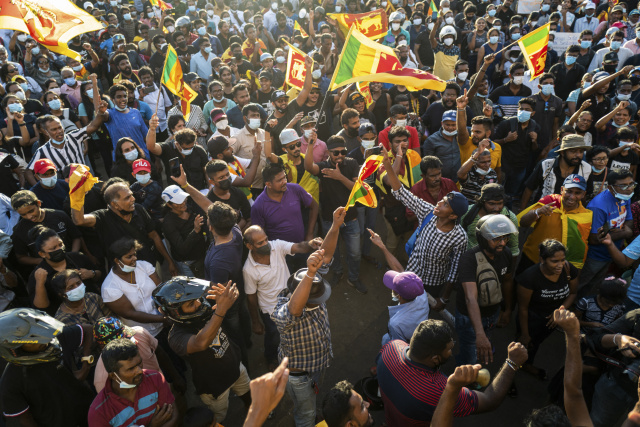 People shout slogans during an ongoing anti-government demonstration outside the president's office in Colombo on April 15, 2022, demanding the resignation of President Gotabaya Rajapaksa over the country's crippling economic crisis. (Jewel SAMAD / AFP)

The move came ahead of Colombo's planned talks with the International Monetary Fund in Washington on Monday to negotiate a bailout as the country has run out of foreign exchange to finance even the most essential imports.

The island nation is grappling with its worst economic downturn since independence in 1948, with regular blackouts and acute shortages of food and fuel in addition to record inflation.

The crisis has caused widespread misery for Sri Lanka's 22 million people and led to weeks of anti-government protests.

Several trade unions joined demonstrators laying siege to President Gotabaya Rajapaksa's seafront office for an eighth straight day Saturday demanding that he and his government quit, with thousands of health sector trade workers marching to the Galle Face promenade to join the protest.

Colombo Stock Exchange officials said they were under pressure from brokers and investors not to reopen on Monday to prevent an anticipated collapse of the market.

The CSE said regulators had expressed concern over the "ability to conduct an orderly and fair market" and it would remain closed until Friday due to the "present situation in the country".

The central bank almost doubled its benchmark interest rate to 14.5 percent following the close on April 8, the last trading day before the holiday.

And in the face of an unprecedented forex crisis the government on Tuesday declared it was suspending interest and capital payments on its huge foreign debt.

The CSE's All Share Index has shed over 38 percent in the past three months, while the Sri Lankan rupee has fallen by more than 35 percent against the US dollar in the past month.

Cricket is avidly followed in the Indian Ocean island nation and the pair called on other former players to support peaceful protests.

"Cricket is driven by spectators," Ranatunga said outside the colonial-era building in Colombo on Friday, surrounded by demonstrators, some of whom have been camping overnight since last week.

"Our fans are on the streets today because they no longer can bear the hardships. We must be with our fans when they need us most. Sports stars must physically join the protests."

"Your message is loud and clear," he told the tens of thousands of protesters. "I hope the authorities will listen and ensure a brighter future for all of us."

Diplomatic sources said ambassadors have made it clear to top politicians that any use of violence against the peaceful protest could jeopardise the planned bailout talks with the IMF next week.

Sri Lanka is to meet with IMF officials in Washington from Monday to negotiate a financial package to address the balance of payments crisis and the shortage of foreign reserves.

Sri Lanka had sought debt relief from India and China, but both countries instead offered more credit lines to buy commodities from them.