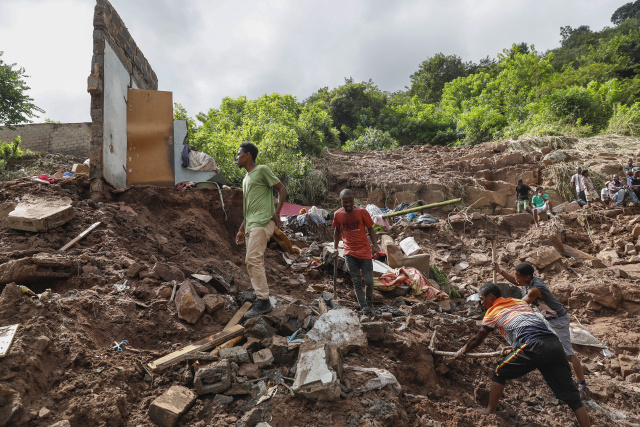 Family members assist with clearing debris for member of the South African Police Services (SAPS) Search and Rescue Unit to conduct search efforts to locate ten people who are unaccounted for from area of KwaNdengezi township outside Durban on April 15, 2022 after their homes were swept away following the devastating rains and flooding. Police, army and volunteer rescuers on Friday widened the search for dozens still missing five days after the deadliest storm to strike South Africa's coastal city of Durban in living memory as the death toll rose to nearly 400.
The "unprecedented" floods, which affected nearly 41,000, left a trail of destruction and at least 395 people dead.
With the government coordinating the search-and-rescue operation, the official number of people missing in KwaZulu-Natal province stood at 55. (Phill Magakoe / AFP)

A week after unprecedented rain began to pound the city of Durban and KwaZulu-Natal (KZN) province, the death toll stood at 443, and rescue workers said hopes of finding more survivors were fading.

Clyde Naicker said his brother Ronald had been missing for a week, since he disappeared while trying to get to his job as a hospital radiographer.

"Apparently from what we heard, his vehicle got flooded and then he tried to go to safety," Naicker said. The family has been searching every day, but police only joined their effort on Monday.

In addition to his wife, 49-year-old Ronald has two children, aged just two and three.

"The tragedy currently unfolding in our province is one of the worst natural disasters in the recorded history of our country," KZN's provincial government said.

Funerals were being held across the city of Durban, which bore the brunt of the storms.

But with damaged roads and waterlogged cemeteries, burials were difficult.

"There are so many deceased, and the mortuaries can't keep up because they have been so inundated. So it is taking a little longer to get the deceased out for burial," said Pieter van der Westhuizen, general manager for funeral services at the Avbob insurance company.

KZN Funeral Directors Association representative Nasan Chetty said the continuous rain had made it "very difficult to do burials".

"If we dig the graves and then come back to do the burial a few hours later it is water-logged," he told AFP.

Swathes of eThekwini, the municipality that includes Durban, remain without electricity or water, and KZN warned it could take time before services are restored.

"There are areas that have suffered extensive damage which will take longer to repair," the province said in a statement.

But eThekwini deputy mayor Philani Mavundla said in a television interview that 80 percent of the city's water works were down. Water tankers were being deployed across the region, but the authorities were struggling to fill them.

Some of the troops include plumbers and electricians, joining the mammoth task of trying to get life back to normal.

Many streets remain slathered with mud. In areas where repair crews have yet to reach, the homeless cleared roads to make way for water tankers to pass, an AFP correspondent observed.

"Well-off families come with 13 buckets and you only have two," said Philakahle Khumalo, a 30-year-old mother of two.

"There is also a lot of pushing there. People are desperate -- they don't care about the next person."

The deadliest storm on record dumped apocalyptic levels of rain on Durban and the surrounding area.

Some 40,000 people were left homeless and more than 550 schools and nearly 60 health care facilities have been damaged, according to government tallies.

Many children are due to return to class on Tuesday after the Easter break, but authorities warned that 271,000 students may not be able to attend due to damaged schools.

The government has announced an immediate one billion rand ($68 million) in emergency relief.

"The rescue operations have stopped. It's now more of a search and recovery," he told AFP.

The normally azure waters at Durban's famed beaches have been turned a muddy brown by the mountains of earth and debris washed to the shore.

The intensity of the floods took South Africa, the most advanced African economy, by surprise.

The country is still struggling to recover from the Covid pandemic and deadly riots last year that killed more than 350 people, mostly in the now flood-struck southeastern region.

General » Be a reporter: Write and send your article » Subscribe for news alert
Tags: SAfrica, flood