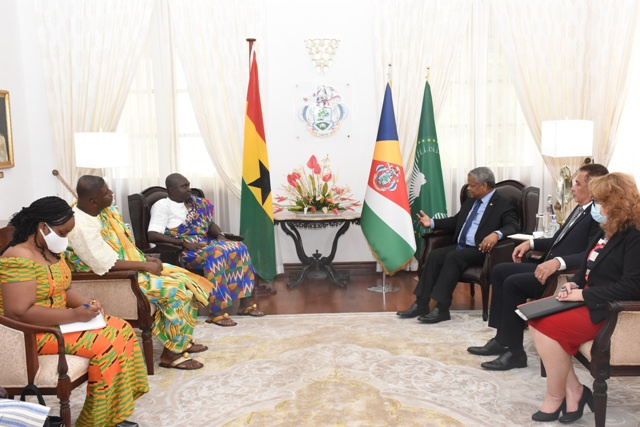 Strengthening relations in education, administration and tourism was part of the discussion between High Commissioner Owiredu and President Ramkalawan. (Seychelles Nation)

Ghana seeks to strengthen relationships with Seychelles in education, administration and tourism, while discussing other potential areas for cooperation, said the newly accredited Ghanian high commissioner.

"There are already five Ghanian teachers here contributing to your economic development. We plan to increase the number of teachers as the president thinks it will be good. We also have really good universities which students from Seychelles can take advantage of," Owiredu told reporters.

Talking about cooperation in the administrative sector, he said that Ghana has for many years been gaining core competencies in the public service field and wants to share these experiences with Seychelles. He further outlined that the African country can also learn from Seychelles, an archipelago in the western Indian Ocean.

"For example, you have very nice and clean beaches. We also have some beaches but they are not well taken care of. In the tourism sector, you have done a lot more than what we have done, so it is about the exchange of ideas. That is the relationship that we want to see for a start," said Owiredu.

As the fifth Ghanian high commissioner to Seychelles, Owiredu also outlined that he and his team have identified one or two other areas of potential cooperation "but because we have not formally discussed them, I do not want to air them publicly."

During his official visit, he will also meet with the Ghanian community living in his Seychelles and other top government officials.

"The desire at the end of the day is to see our people fully employed. The youth is really important, and if the youth is employed then most of our problems will abate. As such, we want to create these opportunities and establish more businesses amongst ourselves and get the youth from both countries engaged," said Owiredu.

The newly accredited high commissioner is based in Pretoria, South Africa.

Seychelles and Ghana established diplomatic relations on October 10, 1988, though the two countries have historical ties dating back to the late 1890s. The king of the Ashanti - Prempeh I - along with some members of his family were exiled to Seychelles by the British colonial authorities of the time.