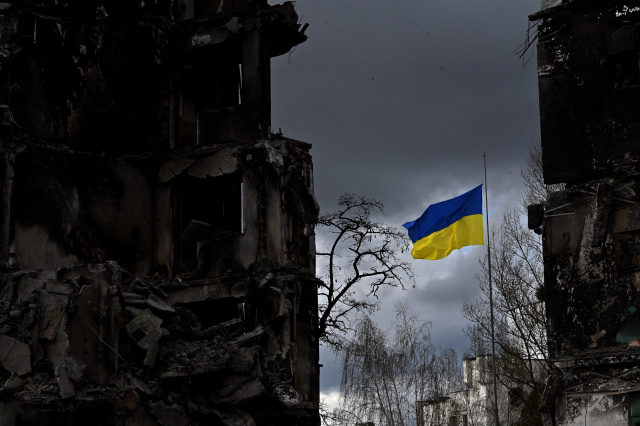 The Ukrainian flag flutters between buildings destroyed in bombardment, in the Ukrainian town of Borodianka, in the Kyiv region on April 17, 2022. Russia invaded Ukraine on February 24, 2022. (Sergei SUPINSKY / AFP)

Russia launched dozens of air strikes across eastern Ukraine, as a new phase of the bloody conflict opened with fighting raging in the Donbas region.

"Instead of a celebration of new life, this Easter coincides with a Russian offensive in eastern Ukraine," Guterres told reporters.

"The intense concentration of forces and firepower makes this battle inevitably more violent, bloody and destructive," he said, calling for a "humanitarian pause" from Holy Thursday until Easter Sunday on April 24.

"Easter is a season for renewal, resurrection and hope.... But this year, Holy Week is being observed under the cloud of a war.

"Hundreds of thousands of lives hang in the balance," the United Nations chief said.

Ukraine's armed forces confirmed fighting had increased throughout the east, after President Volodymyr Zelensky said Russia had kicked off the widely anticipated offensive in the Donbas, Ukraine's industrial heartland.

Russia's military campaign refocused on Donbas, which pro-Moscow separatists have partly controlled since 2014, after its efforts to capture the capital Kyiv were thwarted.

Guterres said a truce would allow safe passage for civilians to flee the eastern war zone, and for humanitarian aid to be delivered to the hardest-hit areas -- in particular the cities of Mariupol, Kherson, Donetsk and Lugansk.

More than 12 million people have fled their homes since the invasion began on February 24, the head of the International Organization for Migration Antonio Vitorino told the council.

Irish Foreign Minister Simon Coveney, who was in New York, branded the Russian offensive "madness" and called for an immediate ceasefire.