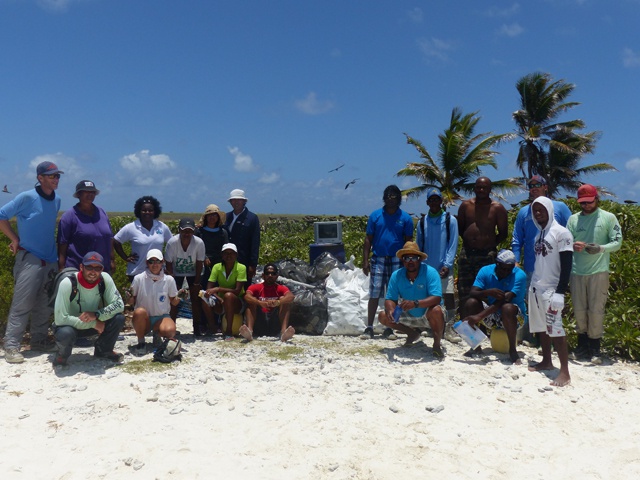 The ICS team is helped by Fly Castaway fishing guides to clean up the masses of marine trash, including a television, which was found washed up on the shores of Ile Goëlettes. (ICS Seychelles)

(Seychelles News Agency) - Conservation officers working to establish the first conservation centre on the Farquhar group of islands in the Seychelles archipelago consider themselves fortunate to be stationed on one of the most beautiful and remote places on earth.

However, Aurélie Duhec and her small team from the Island Conservation Society (ICS) are facing an uphill battle against a never-ending torrent of sea trash and fish aggregation devices (FADs) washing up on the pristine powder-white beaches of the atoll.

Discovered in 1501 by Portuguese explorers, the Farquhar atoll was named after Robert Townsend Farquhar, the first British Governor of Mauritius, in 1824. It is one of the largest atolls in the Seychelles archipelago of 115 islands, covering an area of about 17,800 hectares.

Comprised of ten islands, Farquhar is the most southerly point of Seychelles and is closer to Madagascar than the main inhabited island of Mahé. The two main islands, North and South islands, are by far the largest, making up 97 percent of the atoll’s total land mass.

The atoll is considered as a very important bird area with an abundance of nesting seabird species. The ICS believes that there is still a lot to be discovered on the group of islands, and has received funds from the GEF (Global Environment Facility) to set up a conservation centre for monitoring and research purposes.

The exploration of the eastern and windward coasts of the North and South Island, both of which are important sea turtle nesting and juvenile bird flight training sites, led to the team being left shocked and dismayed by the distressing amount of marine debris being washed up on the beaches.

The team reported being especially concerned by the presence of plastic bags, fishing lines and FADs, which threaten both marine creatures and birdlife in the area. The ICS team on Alphonse recently revealed to SNA the increasing threat that FADs pose to conservation efforts on the outer islands.

“Those beaches sadly spoiled by human debris are a critical nesting habitat for sea turtles,” Aurélie told SNA, adding that the ICS would need to work closely with its partners to clean up some 18 kilometres of shoreline from the vast quantities of litter.

It is likely that the sea trash could be originating from the Indian Ocean Garbage Patch, a vast collection of floating plastics, discarded fishing equipment and broken-down pieces of plastic polymers that pose a huge threat to the fish, marine mammals and birds who often mistake them for food.

The rubbish accumulates loosely in large 'gyres' throughout the world’s oceans, collected in a circular pattern by ocean currents. Some pieces eventually wash up on nearby shores, leading to land pollution of pristine beaches such as the ones in the Farquhar atoll.

A journey of discovery

A trained geologist and oceanographer, French-born Aurélie first came to Seychelles in 2008 to conduct research. She returned in 2009 and worked for 8 months on the Aldabra atoll before joining the ICS team on Alphonse Island in 2011, where she rescued the legendary red-footed booby known as Willie.

Speaking to SNA, Aurélie described her experience of working as a conservation officer on the UNESCO World Heritage Site of Aldabra as a journey that would change the course of her life forever.

“The small number of privileged people who have experienced life on the atoll would agree with us that Aldabra is unique not only by its authentic beauty or its untouched wildlife, but also by the indescribable atmosphere making everyone feel in harmony with nature,” she said.

This magical setting was the stage where Aurélie and a Seychellois conservation ranger fell in love, a working and romantic partnership that has been sustained until the present day.

“Since our experience on Aldabra, we are working in a perfect franco-seychellois tandem for the conservation of the Seychelles Islands,” she said. “We like to believe our story is the result of Nature’s inspiration, who creates teams for its protection, rather than just a coincidence…”

Since the two were posted on Alphonse in January 2011 as part of the ICS team on the island, the team’s mission was to protect endangered and vulnerable species, tackle coastal erosion and marine pollution and help visitors to the island connect with nature.

“Three years on a small island is long, but ironically, we left the island frustrated for not having had the time to complete all our goals,” she said wryly. “It is now the mission of the new team. Since mid-2014 the Centre has worked well and operated at 3 staff with full equipment.”

While the biodiversity of the populated inner islands of the Seychelles have suffered from overfishing and other man-made threats, the outer coralline islands still offer important conservation hotspots that require urgent protection.

To this end, ICS posted Aurélie and her partner Richard to Farquhar last month to set up a Conservation Centre to research the atoll’s biodiversity and ecosystems.

The data the team collects will be used to define the boundaries of new protected areas within the atoll, which includes South Island, Ile Goëlettes, Banc de Sable and the marine seascape extending a kilometre from the edge of the reef.

From the sky, Farquhar Atoll looked huge to Aurélie and Richard, and from their seats in the plane they already began to dread the routine turtle patrols they would have to make around the large islands.

Under the blazing sun, the pair exhausted themselves exploring the main islands as well as Goëlettes and Banc de Sable, all the while monitoring sea turtles and counting birds.

“But what an incredible atoll,” she enthused. “The beauty of the landscape and of the wildlife kept us going ahead in a constant wonder.”

Aurélie has described the experience of setting up the base as happy, despite the daunting amount of work facing the small team. The Islands Development Company (IDC) provided the team with a house, an office and manpower to help with daily tasks.

“To date we successfully worked together in the release of giant tortoises kept in captivity, the clean-up of Goëlettes Island with the help of Fly Castaway fishing guides and the set-up of sorting rules of domestic waste on the island,” she said.

Setting up a base on an almost-deserted island being almost akin to being in a reality show, the team pushes ahead with endless work.

“Once we finish with the field work we move on office duties, we try our best to not let our extensive data accumulate, otherwise it will be unmanageable,” said Aurélie. “The day ends with home duties, and like most of the staff on the island we had to plant our own vegetables for our subsistence, while fresh fish is provided 4 days a week.”

Aurélie is glad that Richard is an avid gardener and cook, planting pumpkin, watermelon, sweet melons, potatoes, corn and other fresh vegetables. They constructed a crude barrier made out of coconut palm leaves around their home garden to keep out the free-range fowls that roam in the tiny village.

Starting off with the exploration of North Island, which is bordered on one side with a lagoon, the pair discovered that although the beach was unsuitable as a nesting habitat for sea turtles due to its raised limestone surfaces, the lagoon created a natural nursery environment for marine creatures. Aurélie and Richard were stunned by the spectacle of foraging moustache trigger fish, young whip rays, black-tipped and lemon sharks swimming in the crystal clear turquoise waters.

“The next day, Farquhar offered us an even better surprise: in an expedition to the western coast of South Island we did not expect to see a such a large red-footed booby breeding population,” said Aurélie. “Those birds are incredibly funny, and some seems to be fearless to humans; they startled us many times while trying to land on our heads!”

Farquhar is recognised as an Important Bird Area (IBA) by Birdlife International due to significant numbers of breeding seabirds found on the atoll’s islands.

“We observed chicks at different stage of development and noticed that the species is expending to Manahas with many birds roosting in North Island as well; according to the locals their presence on those last cited islands is very recent,” she said, adding that a number of boobies with different and new colour variations or morphs were recorded.

The pair was also struck by the abundance of birds on Goëlettes Island, which supports a large breeding colony of sooty terns as well as roseate terns, black-naped terns, brown noddies and a small population of lesser brown noddies.

Last month, SNA spoke to ornithologist Chris Feare, who said that a lack of food in the Indian Ocean may be threatening sooty tern populations, and this theory seemed to be supported by Aurélie, who was distressed to see a large number of little chicks abandoned by their parents and starving to death on Goëlettes.

“This year, the fish apparently became scarce during the breeding season of the seabirds, perhaps due to a temporary change in the weather,” she explained.

Banc de Sable, an islet created from a sandbar and estimated to be only around 45 years old, is today a well vegetated island and a good breeding site for black-naped terns as well a suitable nesting site for turtles.

All in all, Aurélie feels very excited and privileged to be setting up a new base on the atoll, but is also very conscious of the urgent action that needs to be taken to protect the wildlife living in this paradise from the impacts of human behaviour.