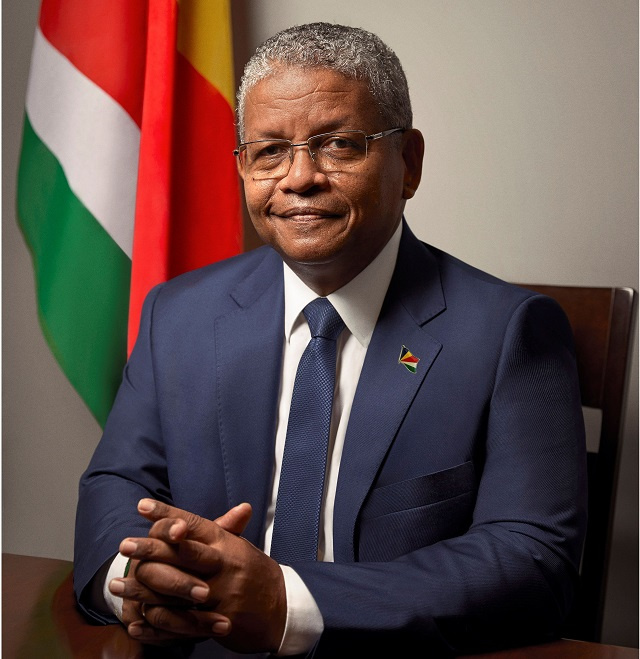 Ramkalawan said that Seychelles pledged its support to ensure maritime security in the fight against terrorism, drug trafficking and other crimes. (State House)

According to a press statement from the EU Naval Forces (EU-NAVFOR) Somalia, the French surveillance frigate, under Operation Atalanta's command, carried out four consecutive drugs seizures in the international waters during a counter-piracy patrol between April 14-18.

During the counter narcotics operation in the western Indian Ocean, close to 1.4 kg of heroin, 1.2 kg of methamphetamines and 25kg of hashish, worth more than $236 million in street value in Europe, were seized.

Ramkalawan said that since the operation began, Seychelles pledged its support to ensure maritime security in the fight against terrorism, drug trafficking and other crimes.

"We are proud to be associated with the successful operations of the French surveillance frigate Le Floréal. One of the boats captured was only 200 nautical miles from Victoria, indicating that these drugs were destined for Seychelles. Seychelles will continue to cooperate with its international partners in the fight against drugs," he added.

EU-NAVFOR said that "while the number of drug users in Africa is estimated to rise by 40 percent by 2030 according to the UNODC, these four drugs interdiction operations in only five days off the coasts of Somalia, Kenya and Tanzania – an unprecedented event in the area – prove that the fight against drug trafficking is more necessary than ever."

Seychelles, a group of 115 islands spread over an Exclusive Economic Zone of 1.4 million square kilometres, finds it difficult to deter and suppress illegal activities at sea, due to its immense maritime space.

The island nation signed a bilateral agreement, the first of its kind, with the United States in July last year, allowing U.S. naval forces to work on Seychelles' military vessels and vice versa, in maritime operations, in an effort to obtain assistance to protect its territorial waters.