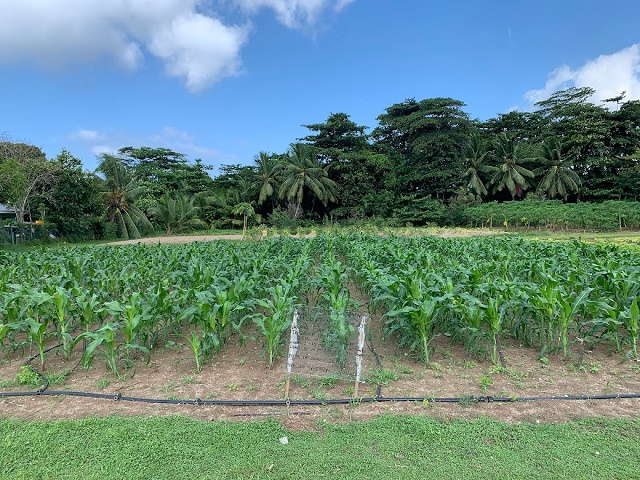 Govinden said that since Seychelles did not traditionally produce flour from corn, the country needs to find a way to better give value to these crops. (Rodney Govinden)

(Seychelles News Agency) - The Seychelles National Biosecurity Agency has embarked on a regional project to boost the supply chain of healthy seeds and plants.

The project, which aims at allowing livestock farmers to rely on their own animal feed production and improve cassava production, is being funded by the European Union and implemented in partnership with the Indian Ocean Commission (IOC).

This is being done together with relevant agencies in Seychelles, Mauritius, Reunion, Madagascar, and Comoros and targets the recovery of a regional healthy seeds and seedlings sector in the South-West Indian Ocean.

The principal agricultural scientist at the Anse Boileau Research centre, Roy Govinden, told SNA that since Seychelles did not traditionally produce flour from corn or uses a lot of beans, the country needs to find a way to better give value to these crops.

"We are exploring using it as animal feed as well as looking into the possibility of processing or adding value to them, such as flour production, among others," said Govinden.

"Alongside the fact that the produced corn can be fed to livestock straight away once harvested, farmers will have to conserve the seeds so that they will be in a position to continue production. At the moment we know that land is a constraint here in Seychelles limiting large-scale production, so individual farmers will have to produce their own corn for their livestock," said Govinden.

He said that discussions will be held with the Island Development Company (IDC) to see if there will be a possibility for the company to fit corn and bean production in its agricultural ventures on the outer islands.

Discussions with local animal feed manufacturers will also have to be undertaken should there be a need to produce animal feed on a bigger scale.

"We will need to learn more about the economic costs of producing corn locally and whether it will be more profitable growing it here or importing it," said Govinden.

Under the same project, Seychelles will also be receiving a variety of in-vitro cassava samples from Comoros and Madagascar.

With the varieties grown in Seychelles taking nine months to reach maturity, the research centre is looking at acquiring other varieties that can be harvested in a shorter period of time.

Once acclimatisation is completed and the most adequate varieties have been identified and reproduced, the cassavas will be distributed to farmers who will grow them for human consumption. The same exercise will be carried out with local varieties.

By including farmers in the production of these seeds and plants, Seychelles, a group of 115 islands in the western Indian Ocean, will automatically increase its production area and improve national food security.