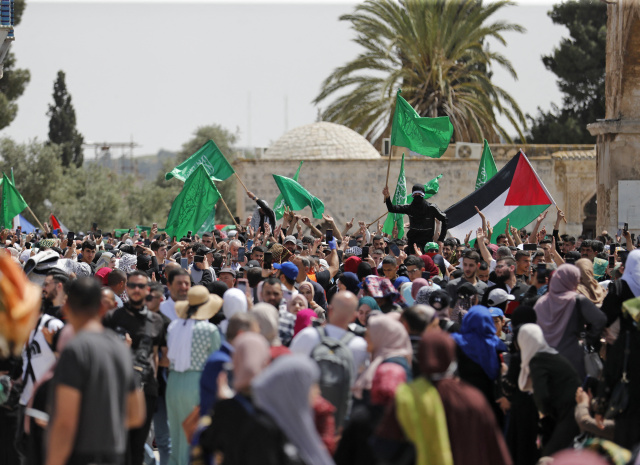 (AFP) - The United Nations voiced deep concern at the worsening violence between Israel and the Palestinians, as clashes erupted again at Jerusalem's flashpoint Al-Aqsa mosque compound on Friday.

"We are deeply concerned by the escalating violence in the occupied Palestinian territory and Israel over the past month," said Ravina Shamdasani, spokeswoman for the UN Office of the High Commissioner for Human Rights.

Friday's new clashes between Israeli police and Palestinian protesters at the Al-Aqsa compound come after a month of deadly violence, as the Jewish festival of Passover overlaps with the holy Muslim fasting month of Ramadan.

The violence has sparked international fears of a major escalation, a year after similar unrest led to an 11-day war.

"The use of force by Israeli police resulting in widespread injuries among worshippers and staff in and around the Al-Aqsa mosque compound must be promptly, impartially, independently and transparently investigated," she said.

"Those responsible for any violations should be held to account, and policies and procedures on the use of force reviewed with a view to avoid any further violations."

She said the conduct of Israeli security forces on April 15, captured in numerous videos, "raises serious concerns that the use of force was widespread, unnecessary and indiscriminate", Shamdasani added.

Noting how the tension in Jerusalem had impacted on other areas, the spokeswoman said Israel's intensified military operations in the West Bank, especially in Jenin, and the use of firearms by Palestinian militants, "place Palestinian residents at high risk".

She said the weeks of violence included "the most serious attacks in Israel in many years", with 12 Israelis and two foreign nationals "killed by attackers in incidents in Beersheba, Bnei Brak, Hadera and Tel Aviv".

She said Israel's raids and arrest operations across the West Bank raised serious concerns of "excessive use of force and ill-treatment and arbitrary arrests of family members of wanted people".

"Some of the killings, including in particular Israeli security forces shooting at a Palestinian woman in Husan on April 10, raise serious concerns of excessive use of force and arbitrary deprivation of life," she said.

"All use of force resulting in killing or injury must be promptly, impartially, independently and transparently investigated, and those responsible for any violations held to account."

Furthermore, she said the Israeli authorities' response to attacks in Israel, such as movement restrictions, raised concerns about possible collective punishment.

International humanitarian and human rights law strictly prohibits penalties against people or groups for acts they have not personally committed, said Shamdasani.

She said the office of UN human rights chief Michelle Bachelet was calling for calm and urged investigations where people had been killed or injured.