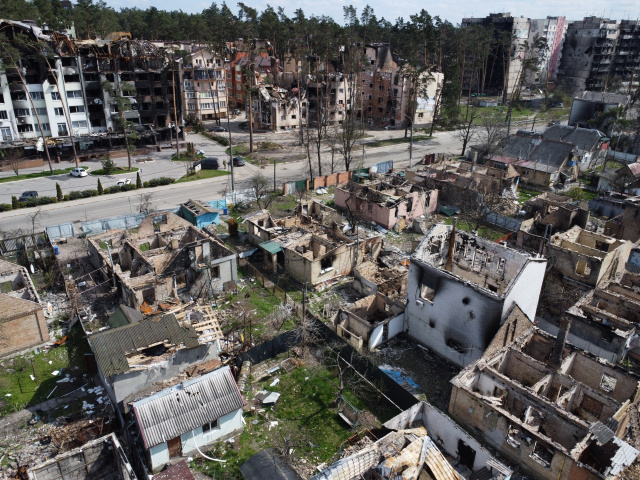 This aerial photograph taken on April 24, 2022 shows a destroyed residential area in Irpin, northwest of Kyiv, amid the Russian invasion of Ukraine. (Genya SAVILOV / AFP)

(AFP) - Forty countries will hold emergency talks in Germany on Tuesday on bolstering the defence of Ukraine, which the US Pentagon chief believes "can win" against Russia if given the necessary means and backing.

The meeting called by the US at its Ramstein airbase in southwestern Germany is "focused on doing things to generate additional capability and capacity for the Ukrainian forces", said Defense Secretary Lloyd Austin following his visit Sunday to Kyiv.

"We believe that they can win if they have the right equipment, the right support," Austin said.

Just ahead of the talks, Germany signalled that it was ready to authorise the deliveries of tanks to Ukraine, in what would be a major switch in Berlin's cautious policy vis-a-vis defence equipment supply for Kyiv.

Austin, accompanied by US Secretary of State Antony Blinken, had met Ukraine's President Volodymyr Zelensky in their first visits to Kyiv since Russia invaded Ukraine two months ago.

The US is already the biggest supplier of international military aid to Ukraine.

And it pledged to do "everything that we can to get them the types of support, the types of artillery and munitions that will be effective in this stage of the fight", Austin told a press conference in Poland.

Kyiv is seeking heavy artillery and tanks to repel Russian forces trying to seize complete control of its vast southern plains and the eastern region of Donbas.

But the Russian-made equipment which Ukrainians have been trained to use is now rare.

Some countries in eastern Europe which still had stocks have sent them to Kyiv, sometimes in exchange for newer generation US equipment, as journalists accompanying the US ministers were able to witness.

Austin and Blinken held their press conference in Poland following their visit to Kyiv at a warehouse stacked high with tonnes of humanitarian and military aid ready to be packed onto trucks bound for Ukraine.

Next to the pallets of medical material and diapers were hundreds of Russian-made shells and rockets provided by countries that prefer to remain discreet on their participation in arming Ukraine.

Outside the warehouse, seven vehicles towing howitzers with a range of 30 kilometres (18 miles) were awaiting transfer. They were parked in front of hundreds of pallets of carefully packed shells and various ammunitions.

But all that is insufficient, and Washington, which had in the beginning limited its deliveries to so-called "defensive" weapons, has started to send heavy US-made arms, like howitzer cannons and various armoured vehicles.

"We're also engaging our colleagues in other countries for the same type of capability, and we see indications early on that... many countries are going to come forward and provide additional munitions and howitzers," said Austin.

France is delivering Caesar cannons with a range of 40 kilometres and Britain has provided Starstreak anti-air missiles and tanks.

The meeting is also aimed at ensuring Ukraine's security in the longer term once the war is over.

"It's really largely about modernising and making sure their military is still potent and capable going forward. It's not about security guarantees, it's about their actual military posture," said Pentagon spokesman John Kirby on Friday.

The meeting on Tuesday will not be held under the auspices of NATO, even if the alliance's secretary general Jens Stoltenberg will be attending.

"As you know, NATO as an alliance is not providing security assistance to Ukraine, so this is not being done under the NATO umbrella at all," stressed Kirby.

Among the 40 invited countries are not only Washington's European allies, but also countries further afield like Japan or Australia, which fear that a Russian victory in Ukraine could set a precedent and spur on the territorial ambitions of China.

Finland and Sweden, traditionally neutral countries now looking at joining NATO following Russia's aggression in Ukraine, are also among countries at the talks.