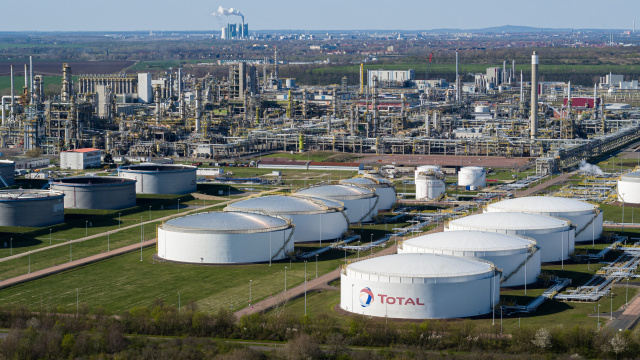 (AFP) - Russia said Wednesday it had destroyed a large quantity of Western-supplied weapons in Ukraine, while halting gas supplies to EU and NATO members Poland and Bulgaria in a move condemned by European capitals as attempted blackmail.

With the conflict that has claimed thousands of lives entering its third month, Ukraine conceded Russian forces had pushed deeper into the country's east and captured several villages, as Moscow intensifies a renewed offensive to take control of Donbas.

They hit hangars at an aluminium plant near the Ukrainian city of Zaporizhzhia with "high-precision long-range sea-based Kalibr missiles", the ministry said, without specifying the weapons destroyed.

It comes a day after a summit in Germany of 40 Western allies to discuss arming Ukraine where Washington pledged to move "heaven and earth" to enable Kyiv to emerge victorious from the war.

Tensions are also rising in a breakaway region of Moldova bordering southwestern Ukraine where pro-Russian separatists claimed shots were fired across the border towards a village housing a Russian arms depot after drones flew over from Ukraine.

The unrecognised Transnistria region has reported a series of explosions in recent days that it called "terrorist attacks", leading Kyiv to accuse Moscow of seeking to expand the war further into Europe.

Russia said it had stopped all gas supplies to Poland and highly-dependent Bulgaria as a result of "unprecedented unfriendly steps in the economic sphere" and their refusal to pay in rubles.

President Vladimir Putin last month warned Moscow will only accept payment for deliveries in its national currency, with buyers required to set up ruble accounts or have their taps turned off.

Moscow is grappling with the fallout from numerous rounds of European and US sanctions that have targeted various sectors and left it unable to utilise foreign currency, including its own reserves.

"They blocked from us -- or, to put it plainly, stole -- a fairly significant amount of our reserves," Kremlin spokesman Dmitry Peskov told reporters on the need for the "new payment system".

"So there is no question of blackmail here," he added.

But the European Union said it was "prepared" for the stoppage and was planning a "coordinated" response, labelling it "another attempt by Russia to blackmail us with gas".

Prime Minister Mateusz Morawiecki called it "a direct attack" on Poland, while Bulgarian leader Kiril Petkov described the move as "a gross violation" of its contract with Russian energy giant Gazprom.

Both countries have said they will be able to make up the shortfall from other sources.

The war has exposed the extent of the 27-member bloc's dependence on Russian gas, which accounts for 45 percent of such imports.

Separately, the EU's executive proposed suspending all import duties on products from Ukraine in a bid to help the country's economy survive.

The targeting of Western-supplied arms came as the US and Europe have started to heed Ukrainian President Volodymyr Zelensky's call for heavier firepower to push back the Russian advance now focused on Donbas.

Western allies remain wary of being drawn into an outright war with Russia, but have stepped up military support as Ukraine has maintained its fierce resistance.

Germany announced Tuesday it would send anti-aircraft tanks, in a sharp U-turn on its much-criticised cautious stance.

Britain will on Wednesday urge Kyiv's allies to "ramp up" military production including tanks and planes to help Ukraine, with Foreign Secretary Liz Truss set to call for a "new approach" to confront Putin.

"We must be prepared for the long haul and double down on our support for Ukraine," she is set to say.

"Heavy weapons, tanks, aeroplanes -- digging deep into our inventories, ramping up production. We need to do all of this," Truss will add.

She will also urge Europe to cut off Russian energy imports "once and for all" -- a move that would deprive Moscow of a key source of leverage over its dependent western neighbours.

In the latest diplomatic tit-for-tat moves between Moscow and London, the Kremlin on Wednesday banned entry to 287 British MPs in response to UK sanctions against Russian parliamentarians.

Moscow also said it will withdraw from the United Nation's tourism body, the UNWTO, ahead of a vote by its executive council to suspend its membership over its invasion of Ukraine.

Fighting continues to rage across Ukraine's east, Kyiv's defence ministry said, as it confirmed Russian forces had seized several villages in their renewed bid to "liberate" the Donbas region.

The ministry said a pair of villages in the northeastern Kharkiv region and two in the Donetsk region had fallen.

Meanwhile, three people died and 15 others were injured in bombings in and around the eastern city of Kharkiv, Ukraine's second city, regional governor Oleg Synegubov wrote on the Telegram messaging service.

"The Russians continue their artillery and mortar strikes against residential areas in Kharkiv and its region," he said.

Moscow aims to create a land border between territory held by pro-Russian separatists in parts of the Donbas and the Russian-annexed Black Sea peninsula of Crimea.

Ukrainian presidential aide Mykhaylo Podolyak accused it of grander ambitions and wanting to "destabilise" Moldova, at the other end of the Black Sea, amid growing tensions there.

"If Ukraine falls, tomorrow Russian troops will be at Chisinau's gates," Podolyak said, referring to its capital.

A Kremlin commander last week alleged Russian speakers in Transnistria, occupied by Moscow's forces for decades, were being oppressed.

It raised similar fears to justify in part launching its bloody invasion of Ukraine on February 24.

Before the latest claims Wednesday of shots fired at the Russian arms depot there, explosions had hit the state security ministry, a radio tower and military unit.

The US has echoed Kyiv's concerns -- though stopped short of backing its contention Russia was responsible.