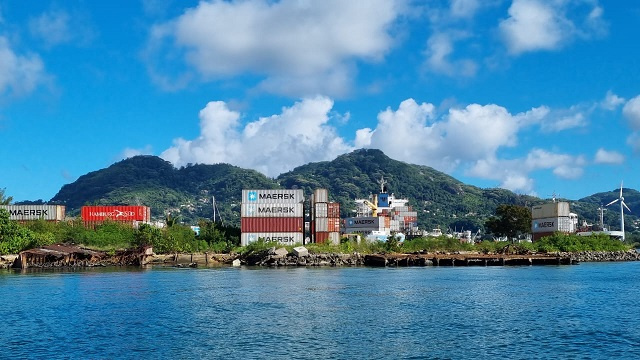 Through the project, the current quay will be extended by 10 metres out to sea towards the man-made Ile de Romainville. (Salifa Karapetyan, Seychelles News Agency)

The rehabilitation and extension of Seychelles' Port Victoria are in motion with potential contractors undertaking a site visit on Wednesday to better understand the extent of work that needs to be carried out before final bids are made.

The project being undertaken by the Seychelles Ports Authority (SPA) aims at having a modern international multi-purpose commercial port at the Mahe Quay in the capital of Victoria.

It has two major components - the construction of a quay wall and cargo terminal, and the dredging of the harbour to accommodate vessels with drafts up to 14 metres.

The project manager, Philippa Samson, told the press that the bidders have all received the necessary documents so as to make their proposals but there are certain features they might not be clear about as most of them are not from Seychelles.

"We did a site visit so they understand and see the extent of work that needs to be done, as well as understand how the port operates. We have also carried out a pre-proposal conference where all the bidders were able to get clarifications on any inquiries they had," said Samson.

Through the project, the current quay will be extended by 10 metres out to sea towards the man-made Ile de Romainville. The channel and turning basin will be dredged to 16 metres and 15.5 metres respectively, allowing larger vessels to come into port. Initially, the port was expected to be extended to 40 metres, a venture the port authority said is too expensive.

"We will still meet international norms, but the terminal operator will have to be more efficient in how he uses the space. The reduction in size means that we will have to look at moving more inland and southwards instead of outwards should we need more space in the future. The 10-metre extension leaves us with a larger turning area for large vessels and it makes it safer for operations," said Samson.

To allow the dredging to take place, there are plans to demolish the Victoria Lighthouse, which was declared a national monument in 2011 and is protected under law. Questions remain as to the legality of the demolishment, which will be discussed in subsequent meetings, as the old lighthouse dates back to 1877.

Also, agencies operating in the ex-Coast Guard area will have to be relocated.

Due to the scope of the project and the impact that it will have, the Port Authority needs to carry out an environment and social impact assessment, which has already started.

A scoping meeting has been held with environmental agencies to understand the concerns that they have and measures that need to be put in place to reduce, mitigate and avoid impacts on stakeholders.

Part of the project will be carried out in close proximity to the St Anne Marine National Park, the oldest marine reserve in the country.

Samson outlined that as part of the set criterion, contractors will need to show that they have carried out work with minimal damages or interference in sensitive environments similar to the one they will be working in.

She explained that the design of the project will have to be carried out alongside the environment and social impact assessment being undertaken so that concerns can be taken into account in the design.

The project is being co-financed by the Seychelles Port Authority, the European Investment Bank, Agence Française de Développement and the European Union, secured by sovereign guarantees.

The Port of Victoria of Seychelles, an archipelago in the western Indian Ocean, is the only port that handles the import and export of goods for the country.