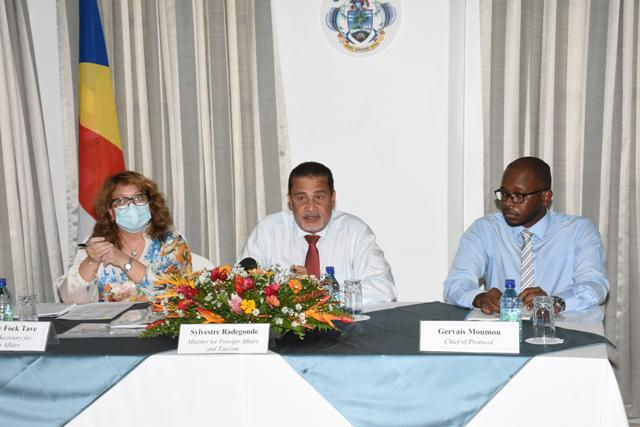 This was in fact the first meeting between the consular corps and the Minister for Foreign affairs, Sylvestre Radegonde (middle), since he took office in 2020. (Seychelles Nation)

(Seychelles News Agency) - Fifteen honorary consuls based in Seychelles have been briefed on the changes being made to the Foreign Affairs department and its future plans in a meeting with the minister on Thursday.

This was in fact the first meeting between the consular corps and the Minister for Foreign affairs, Sylvestre Radegonde, since he took office in 2020.

The minister said that the meeting would have taken place much earlier, but was delayed because of the restrictions in place due to COVID-19.

"Oftentimes, you the consular corps are left behind, as the government tends to meet more with the diplomatic corps, but I wanted to get you involved as well and so that is why I hope to have such meetings on a quarterly basis from now on," said Radegonde.

Radegonde said that one of the changes being made is for a more streamlined diplomatic corps with a focus on nations that can provide benefits to Seychelles in various areas.

"In fact, looking at Europe, I do not think we need the three embassies that we currently have and we can only have one office to serve that region," said Radegonde.

Seychelles, a group of 115 islands in the western Indian Ocean, currently has embassies in Paris, London and Brussels.

Faced with a financial crisis due to the COVID-19, in November 2020, the President of Seychelles, Wavel Ramkalawan, announced the closure of the embassies in Cuba, Sri Lanka and Geneva to reduce expenses.

Another subject discussed was the creation of a new unit within the Consular Affairs Division, headed by Jacques Belle. Under the division, a diaspora unit was set up in July 2021, to help Seychelles keep track of its citizens living abroad.